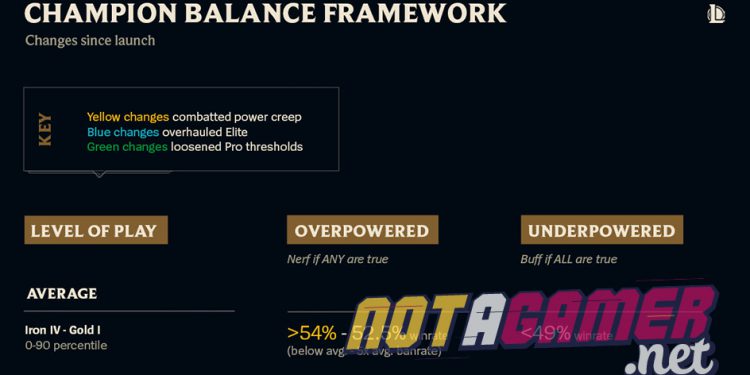 Riot has officially posted the brand new balancing framework in which champions stats adjustment are considered.

In an apparent effort to rectify the ever problematic state of game balancing, Riot has drafted up a process to assess the power of a champion in the currently 148 characters strong roster. Clarity to the players and objectivity toward all champions accross ELOs appear to be the top priorities in the new balancing framework, per Riot Games.

Prior to this statement, Riot has been adjusting the meta of the game (also the power level of every champion) in accordance to stats and a little dash of bias, as they admitted. It seems that Rioters decided it is the high time they did something about this erogenous trend, and put an end to the ever-unbalanced state of the game.

Riot is going to update their approach on balancing based on performance accross brackets. Riot admitted that they “operated under the rough guideline of balancing for Plat+ play”. This resulted in a scenarios where champions who excel in high elo and pro play but possess suboptimal winrate in solo queue like Syndra and Sejuani receive nerfs after nerfs, and champions being nightmares in casual play but have little or even zero value in pro play are let roam free to wreck havok, such as Master Yi, Katarina, Graves, Nidalee, Kha’Zix,…

The aforementioned brackets consist of: Average play (from Iron to Gold), Skilled play (from Plat to Diamond), Elite play (from Master to Challenger), Pro play (Tournaments, currently LPL, LCK, LEC, LCS, and LMS ). The Elite play and Pro play has long been considered as the gold standard for balancing, because of the general mastery of the game and the characters’ power level, therefore the statistics of this tier can be trusted. However, this is exactly what caused caused the problem of balancing across the board mentioned above, as coalescing statistics from the top 0.1 percent player base greatly causes the other 99.99% players suffer, thus generating a myriad of raging Reddit posts like this:

Riot also made several remarks about champions with high play rates (Lee Sin, Yasuo, Zed, Katarina…), champions with high mastery curves (Aurelion Sol, Syndra, Ivern,…), champions with mechanics that are generally considered as “frustrating” by the whole player base, regional differences,….That being said, Riot is seemingly getting sincere about their attempt to adjust the game to provide the most optimal experience for the player.