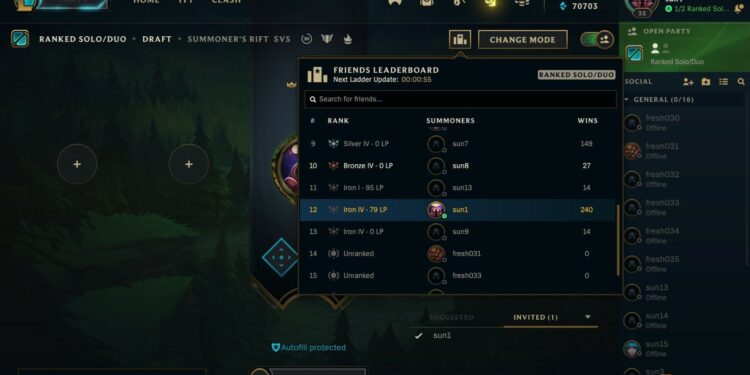 Last week on Riot’s Dev blog, they talked about the changes that ranked games will have in the future featuring Leaderboard with a more expression in the systems.

Today, Riot’s competitive gameplay product lead, Cody Germain, detailed what the Social Leaderboard will look like in the League of Legends client, giving fans a much-anticipated early preview at the new feature.

According to Riot, The new Social Leaderboard will have more performance

League of Legends: Just reopened on the PBE, but the Ultimate Spellbook has made a lot of “funny” bugs

The Social Leaderboard function will generate a leaderboard based on co-player rank. Every participant will have a specific position on the ladder that will be useful for comparison as well as overall progress. As of today, it appears that players in solo/duo and flex queues will be able to view the leaderboard while creating parties.

The disclosed graphic shows a player profile that includes rankings, games, and win rates, with high-performing players at the top and lower-ranked players at the bottom. A timer: “Next Ladder Update” will most likely update the ranks after a short time.

The current ranked system assigns participants to a random group depending on their division, wins, losses, and ladder ranking. With this new feature of Social Leaderboard, players should be able to participate the leaderboard with their friends.

Though Riot has not yet announced an official release date for the new feature, but it is likely to be implemented in League of Legends by September 2021. The dev team has confirmed that the Social Leaderboard functionality is being tested on the Patch 11.16 PBE prior to its formal incorporation into the game.