Did you know: In Summoner’s Rift, a river is not a river, a forest is not a forest – river is basically two ponds 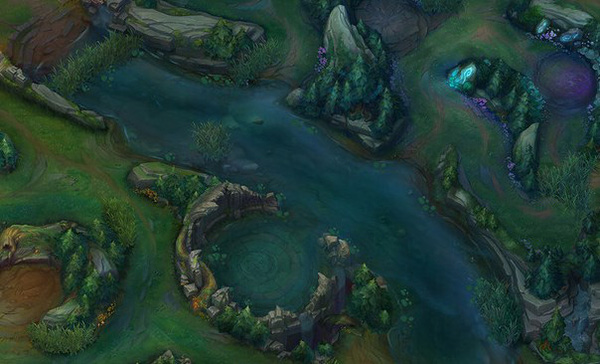 River is basically two ponds – Do you still think that the Dragons and the Baron live on the River, and the house of the Wolves or the Blue, Red is in the Forest? Actually not like that.

What are the Rivers and Forest in Summoner’s Rift? – River is basically two ponds

Summoner’s Rift players are no stranger to the gentle river flowing in front of the Dragon and Baron, as well as the lush Forest where monsters reside. Even after the past 10 years, as well as a lot of changes brought to this map, the Rivers and Forest remain there, everlasting.

By definition, A river is a natural flowing watercourse, usually freshwater, flowing towards an ocean, sea, lake or another river. In some cases a river flows into the ground and becomes dry at the end of its course without reaching another body of water. Small rivers can be referred to using names such as stream, creek, brook, rivulet, and rill. There are no official definitions for the generic term river as applied to geographic features, although in some countries or communities a stream is defined by its size.

Many names for small rivers are specific to geographic location; examples are “run” in some parts of the United States, “burn” in Scotland and northeast England, and “beck” in northern England. Sometimes a river is defined as being larger than a creek, but not always: the language is vague. When visiting the world, we easily see the endless flowing rivers from the towering mountains or places with high terrain, gradually descending to the plains and down to the sea. Sometimes, that water flows to a lake and then stays there.

At the same time, the forest is a large area dominated by trees. Hundreds of more precise definitions of forest are used throughout the world, incorporating factors such as tree density, tree height, land use, legal standing and ecological function. Walking in the forests, we will be immersed in the green of the old trees, the cool air that the green lungs of nature bring, even sometimes the cool of a place rarely see the bright sunlight.

Answering all questions about the TFT Mobile – Why can’t download the game? Why can not log in? – TFT Mobile Fix

But, comparing those with the “river” and the “forest” on the Summoner’s Rift, what do we have?

• We do not know where the river is located. There is a cliff with water in every forest, but it doesn’t look like the water will be flowing into the river in the picture – it seems that it flows to the bottom of Summoner’s Rift.

• Not knowing where to start, nor where to flow and where to end.

• The “river” is not even linked; it is interrupted by the Middle, and there is no sign that it is underground at the bottom to avoid this major obstacle.

• The champions can easily enter the river by walking down a gentle slope – this is quite absurd in reality.

• The dominant plant species in the forest is… grass (and moss on the cliffs), and only a handful of identical pine trees remain. Animals only have Krugs, Blue, Red, Wolf, Dragon, Baron, Crab…This is not true of a forest’s biodiversity principle.

The truth is, what we’ve been calling “rivers” and “forests” all along, is actually just … two ponds and a rocky beach covered with grass.

Sensitive LoL players who have discovered this already are desperate for Riot to have a way to make rivers and forests more meaningful. The post was posted on the Reddit LOL page and attracted hundreds of player comments.

A lot of interesting ideas have been launched and evaluated extremely enthusiastically.

However, most players agree that if Riot was able to make this map with a clear height of terrain, why not make the rocks more trees, darker, and That river will actually flow. Well then, the scenery will definitely be more vivid and attractive.

Sometimes, the way to make the game not dead is extremely simple, without being too picky as the way the 200-year game team is trying to balance the series of champions…

Tags: a forest is not a foresta river is not a river
ADVERTISEMENT