League of Legends: Sadly Yone is Unavailable In Worlds 2020 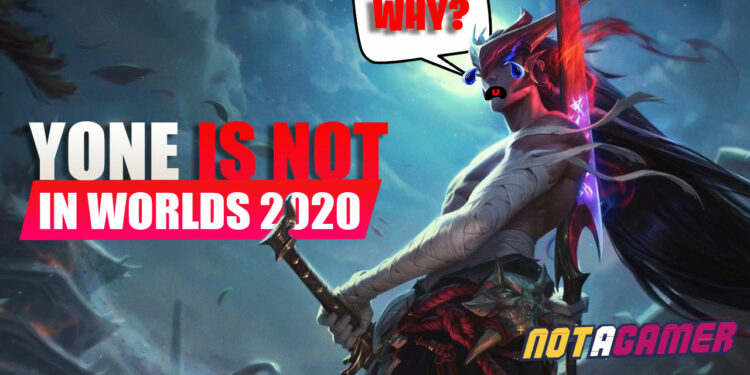 League of Legends: Sadly Yone is Unavailable In Worlds 2020

Sorry to all Yone’s fans out there, you won’t be able to see his performance in Worlds 2020.

Yasuo’s older brother, Yone – The Unforgotten, will be perma-ban in this year Worlds. – Confirmed by Riot. Even though it might be dissapointing since Yone is a new assassin, who can bring joy and outplay into the glorious competition in League of Legends, the actual reasons why Riot decided to eliminate him from the champion pool was actually a wise decision.

To answer the question, Riot posted a dev blog recently, stated that they wouldn’t want to see Yone as a second Pantheon like in Worlds 2019. Riot called that phenomenon “100% pressence”, which mean a champion that is way too broken and every competitive esport teams have to either ban or pick him to guarantee their advantages. In the blog, they did point out a few good examples, the one worth noting is Pantheon. The VGU of Pantheon was released only less than one patch before Worlds 2019. Because it is too near from the competition, Riot was unable to collect enough datas in order to give him appropriate buffs/nerfs. In result, he became the 100% pick/ban problem.

Not only Pantheon was the only problem, back then, Ardent Censer and Khazix’s W slow buff were already broken. Balance a champion is a difficult task for Riot, we must admit. Since the difference between low elo players and high elo players are way to distinctive. They pointed out that they wanted to buff Vladimir, but in Skilled Group Play (From Platinum to Diamond 3), he already achieved 51.1% win-rate. The facts that bringing him back to Pro Play will also mean to destroy the ranking experiences from casual player. They wrote: “This is because balance changes made to Summoner’s Rift will always be the same for all players: From Iron to the top Professional Leagues, we’re playing on the same rift.“

So Yone is banned, will Lillia be too?

Luckily, even though Lillia was only released sooner than Yone for 2 weeks, she will be availble in Worlds 2020. The reason behind that is the way Riot sets rules to decide whether or not a champion will make it way to Worlds. The rule stated: “New champions and VGUS must be enabled for playoffs in the top regions in order to be playable at the next internation tournament“.

The four top regions they mentioned were: LCK, LPL, LEC, and LCS. Unlike Yone, we have had a chance to encounter Lillia’s play in LCS, LPL, and she is also enabled in playoff stages. Lillia has all the required conditions to be able to join Worlds 2020. Furthermore, Lillia is a pretty balance champion right now and her playstyle might open a lot more in-depth strategies that we might witness in the final competition. Even though Yone is nerfed in Patch 10.17, Riot is not confident enough to let him slip through.

In the end, unluckily, we won’t be able to meet Yone, but Lillia is still a completely new champion that may bring fresh air into Worlds 2020. In order to remain balance by not bringing the not-enough-data-collected Yone, Riot want to make sure competitive teams will develop and present new strategies. We ourselves can’t wait to see how every teams accross the planet compete in this prestige tournament.