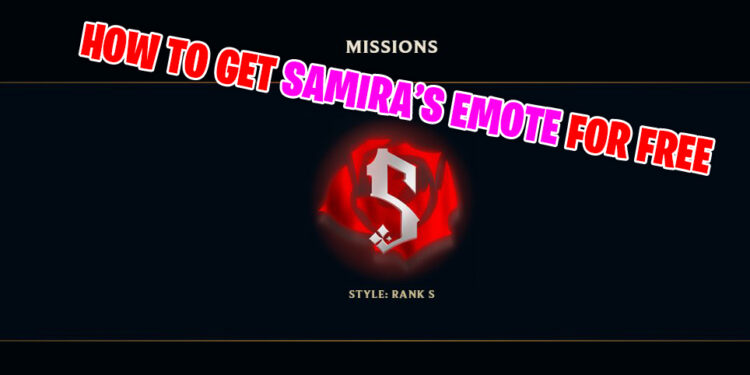 Similar to Sett and Lillia, it looks like you will be able to get Samira for free

Samira will be the 151st champion to be released in League of Legends. With the appearance similar to Cowgirl Miss Fortune, a Shuriman Marksman, with 2 main weapons which are daggers and pistols. Samira’s ultimate is “a combination of Katarina’s R, Urgot’s R and Nunu’s R”. She’ll start spinning and shooting bullets from her machine gun as well as throw multiple daggers.

A huge amount of people are reporting to have completed a secret mission that gives the Emote Teaser of the next ADC, Samira – The Requirements to complete the Secret Mission.

There were also quite a few clips and videos posted on Twitter showing people randomly received Samira’s S Emote while they were playing in Summoner’s Rift.

In the clip above, Consta was playing Lillia when he received that “S” symbol. There is no real way to know how to get it, he clearly had pretty low health throughout the whole video.

For another cases, Gokux90 received it just by executing a flawless Evelynn performance and also gathered “First Blood” for his team.

On the other hand, a picture that was uploaded by Letingui with an in-game nickname called SouthStar shown that his health bar is still fairly high. There are a lot of players from the community who also claimed they received symbol even though they had full-hp (such as Fiddlesticks as he can heal pretty fast or Swain while activating his Ultimate).

How to get Samira’s Emote?

In our opinion, Samira will be obtainable via completing a series of challenges provided by Riot similar to Sett’s Calling Card and Lillia’s Haiku. The way that you can obtain Samira symbol might be divide into these few ways:

That’s all we know for now, we will give you more detail knowledge and information as soon as we can.