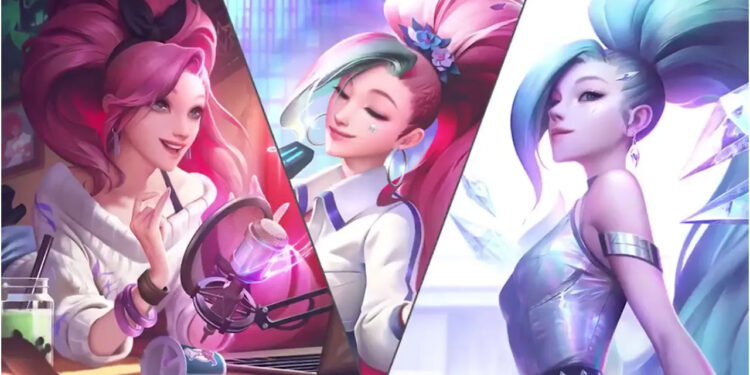 As we predicted she is a musical themed champ that’s going to be played in the mid lane. Seraphine may have some concepts that sound similar to other champs, but in practice she’s a unique control mage that can have a sensational impact on a game in her own way. So with all of that said what does seraphine actually do ?

Too much beauty and shiny <3

Seraphine’s passive is “Stage presence”. Every third basic ability she casts will echo. The second cast is automatic, instantly casting the second use of the ability after the first .

The second part of the passive is every time you cast an ability near an ally, Seraphine creates a note for herself and her nearby allies. When she has her notes available, Seraphine’s next basic attack has extra range and does bonus damage, consuming the note in the process. What’s really interesting is the second part. True to her identity as a pop star, she gains more power with an audience and the bigger the better. Of course we don’t know the exact numbers yet but in a full on 5 vs 5 team fight,  this is expected to pack quite a punch as Seraphine combo spells built her notes up to full and unleashes massive fully charged auto attacks.

Her Q is “High note”. With it seraphine lobs a projectile that does magic damage that increases based on the target’ missing health percentage. There’s really nothing flashy or fancy about it and honestly sometimes simple can be refreshing.

Her W is “Surround sound”. When cast seraphine surrounds nearby allies with her music, granting herself and the allies movement speed and a shield. If seraphine is already shielded before casting, she also heals her nearby allies, restoring more HP based on how many allies she affects. So  it’s basically a Karma mantra shield but when she already has a shield, it can even heal up allies. That sounds pretty nice.

Seraphine’s E is “Beat drop”. With it she unleashes a heavy sound wave that deals magic damage to all enemies in a line, slowing them in the process. If enemies hit are already slowed, they are instead rooted; if the enemies are rooted, it’s upgraded to a stun.

And to round things out, Seraphine’s ult is “Encore”. She takes the stage, projecting a huge way forward that charms enemies, dealing magic damage to them.

Isn’t it a little bit the same as Sona….?

Any champions the wave passes through whether it be friend or foe extend the range of the ability and grants all allies maximum notes. Using this all is gonna be all about positioning. Sure there may be a time where you’re already close enough to hit an enemy you want to charm into their death but to get max effect in a team fight, you’re gonna want to line it up and be patient before just firing it off at the start of a fight.

So let’s loosely summarize her kit, Seraphine is a control mage that can do damage cc the enemy and protect their allies. Say you want to do as much damage as possible and your team has plenty of slows, you should look to cast E to root the already slowed enemies and then use your echoed Q to do maximum damage. Maybe in a different situation when rooting isn’t enough, you need to stop the enemy from attacking back because it’s a fed adc that’ll kill you before you kill it.

“Sona 2.0 aside, she looks so basic. Her default skin isnt that much different from the KDA skin, its just a new outfit really”

“The middle one is great, but the balls kinda go a bit too deep into Orianna territory. Her also being from Piltover makes it worse.”

If you have an enchanter or even just someone like Lee sin on your team, ask for a shield before casting W to get max value by also healing your teammates. The possibilities are endless really and it’s nice to have a mage in the game with such a variety for possible combos all depending on what you need for your comp the enemy comp, and whatever situation you’re in.

Seraphine can really go well with some champions like Leesin, Karma,Singed….

That was all newly updated knowledge about Seraphine. If you have further more   questions or opinions, please let us know by commenting below. Thanks for reading <3.