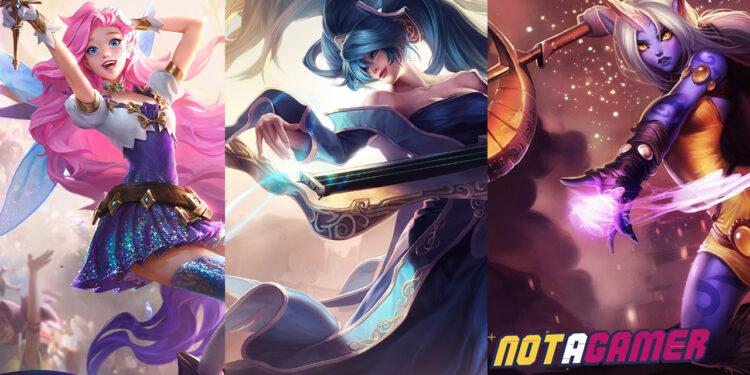 The duo of Sona – Soraka/Seraphine has been rising on the Rift due to recent buffs.

Throughout the last patches of LoL, Riot Games have given tons of buffs to many Support champions, such as Sona, Seraphine, and Soraka. Their aim is probably to save them stable seats in the meta and even the upcoming Worlds. However, an extremely “hilarious” strategy appeared: Sona + Soraka or Sona + Seraphine bot lane.

So, the question is, why has this playstyle been on the top lately? The main reason for this apparently lies in the latest mini-rework of Sona, which requires her to get the maximum stack of her passive to optimize her power. To reach this, she definitely has to stay safe at laning, so her partner needs to protect her from being slain. Nevertheless, most marksmen cannot do it, and as a result, Soraka/Seraphine appears to be the best choice.

Furthermore, ADC and Support regularly do not have Grievous Wound at laning, as it will moderately lessen the champions they use. Marksmen really needs a Mythic item for early fights, and Support has to focus on vision, so early Grievous Wound is absolutely impossible. As a result, the duo of Sona and Soraka/Seraphine is nearly unstoppable.

Additionally, in the current meta, even though there are 2 support champions in a team, the whole comp is still completely good. On the top lane, AD bruisers like Camille, Irelia, or Jax can both deal tons of damage and split push. Jungle and mid lane are totally the same as the champions specializing in damage is now dominating.

If you decide on using this strategy, you have to make sure that your laning is fine and stay safe until Sona gets her max stacks. After that, in fights, Sona’s mission will be healing and continuingly buffing her teammates. If your partner is Soraka, she will be the second HP-pool for your team. Otherwise, with Seraphine, your enemies will have to handle with tons of CC.