Suning 3-1 TES: The fall of LPL’s king and Suning is now heading to the Finals! 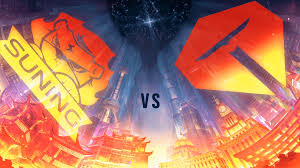 In today’s match, Suning has successfully taken down the most powerful team of LPL – TOP Esports – and make all the way to the World‘s Finals. Congratulation!!

SofM helped  Wukong with a lot of advantages, nonetheless, SN’s botlane  was totallydestroyed, and accordingly, they let Jackeylove gain a lot of power, while making a lift  for TES to take down every first objective, including 2 Rift Heralds and 3 Dragons.

In any case, when entering the teamfight stage, TES had no real way to ensure their ADC.In addition, Bin put a mark on Jackeylove’s head, now allowing him to make a single play. So when their ADC was crushed, TES lost its lone wellspring of damage. SN’s 2 back to back successes of battling straight helped SN to pivot and dominate game 1.

Game 2 was going the same way  to game 1, yet the victor was not SN. In spite of having better cs and gold than Karsa, SofM’s Kindred didn’t perform much in battles. Prior to Lee Sin + Orianna’s combo and Gangplank’s monstrous damage, SN was totally lost in the late game and let TES balance 1-1.

SN has a great arrangement around their top laner – Bin. Despite the fact that they made a couple of mistaken moves, they figured out how to compel TES into a detached position and was frequently constrained into battles. Furthermore, when Bin’s Jax had enough items and 4 Water Dragon, SN overpowered TES in battles and win.

Huanfeng’s Ezreal early game had 2 kills early, making the Suning team’s laning stage much simpler. With the upside of the early game, SN squeezed TES for more often in the rest of the game.

A funny tweet from Team Liquid about this victory of Suning 😀