Swain predicts that the Ruined King is still alive? 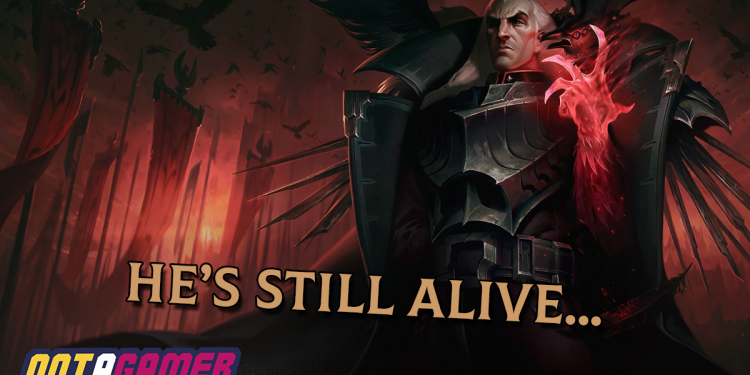 Swain has extremely confusing lines, but it’s like prophecies about characters and giant events of the LoL universe.

Swain is perhaps the most knowledgeable person in this world of Runeterra. He was healed by an ancient demon in his own biography which read, “Gathering knowledge from the demon, Swain foresaw an even greater threat lurking”. Because of knowing so many things, Swain has a lot of difficult conversations and when they come true, people startled about his prophetic ability.

In Swain’s skill set the ability to gather souls is not only meant to empower him, it is described as Swain looking at the victim’s most secret thoughts. So when Swain collects the souls of certain champions, he will make extremely confusing but “predictive” future lines.

Swain also knew about the secret of Demacia, who used the Magic Stone to store magic rather than prevent it. This is also made clear in Lux’s comics when Sylas can rob magic from someone who uses pure power like Garen or Jarvan IV.

He even knows Pyke’s appearance.

So we all know that Swain’s lines reveal a lot of things, from the fact that they are covered to the Champions that are about to debut. And two extremely interesting interactions with Aurelion Sol and Kalista show that the upcoming, Ruined King and another dragon are about to appear.

Swain’s line when collecting Arelion Sol’s soul fragment: “What is this about… Siblings?”.  Many previous interactions with Aurelion Sol show that he is not the only cosmic dragon, nor the strongest being in the universe. Is this a hint that another Dragon like Aurelion Sol will soon join League of Legends?

Swain line when collecting Kalista’s soul fragment: “The first Oath… The one she made to him… “. The first oath is the covenant of Kalista vow to be loyal to the Ruined King until the end of her life, created before the Blessed Isles turned into the Shadow Isles.

Swain’s line when collecting Shadow Isles Champions: “A king remains in the mist and another marches…” This is a line directed at the Ruined King. But we think the champion in the Shadow Isles likely to appear in LOL is Ledros. Ruined King is a bit vague. Ledros is the king’s champion. His sword was given by the Ruined King.

With these details in place, the next champions of League of Legends may have been planned long ago by Riot Games. Perhaps next year, we will have more new champions, notably the Ruined King and Aurelion Sol’s siblings, for example. In addition, Swain also has many other lines related to Demacia and Noxus, referring to a huge war between these two nations.Like VS 2018 event.