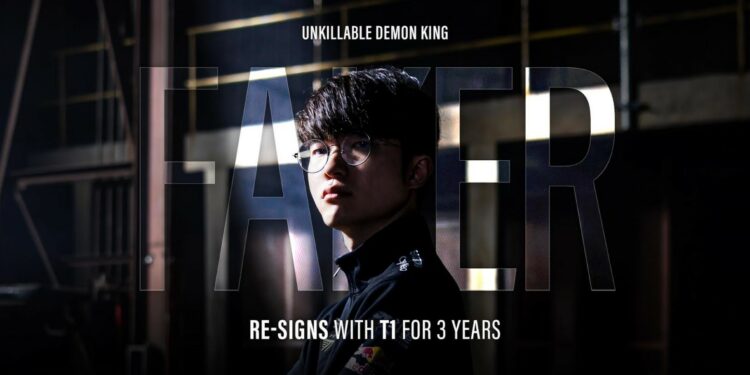 Kim “Roach” Kang-hee, a former professional player and T1 top laner, has returned to the team and will be one of three coaches working with head coach Bae “Bengi” Seong-woong next season. Kim “Sky” Ha-neul and Im “Tom” Jae-hyeon will join him as the new coaching staff for the upcoming season.

The organization also stated today that legendary League player Lee “Faker” Sang-hyeok has re-signed with the team following another spectacular run after the 2022 World Championship.

The 26-year-old mid laner will remain with the squd for 3 more years as he considers the organization’s future. T1 and Faker have been inseparable for years, and have consistently been the benchmark of excellence for numerous League players, coaches, managers, and fans worldwide.

When Faker swept through the competition at Worlds this year, they were just a single game of earning the fourth Summoner’s Cup. Despite having some of the youngest teammates across the tournament, the seasoned leader drove the group to incredible performance throughout the tournament as they competed against teams from all around the world to reach the Worlds Finals.

After being undefeated in the 2022 Spring Split, reaching back-to-back LCK finals, and almost missing out on making history at Worlds, it’s safe to assume that Faker has been energized in his pursuit of another championship.

T1’s League of Legends squad is expecting to go big in 2023, with the new coaching staff and Faker continuing on the team, and expects to reach the Worlds finals next year and win its fourth World Championship.