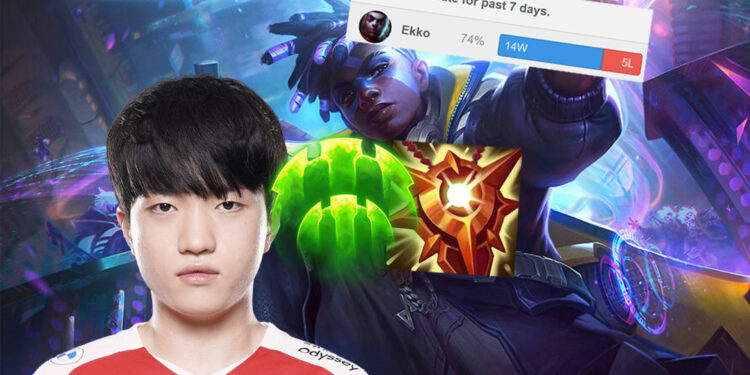 Keria has been trying out Ekko support recently and he has some significantly good results, will we be able to see another new meta at Worlds 2021?

T1 was able to get a ticket to the Worlds 2021 group stage helped Keria achieve his aim of helping him grow and gain experience in order to go further in his career. It is impossible to deny that Keria was one of the most impressive support players in the Korean League of Legends tournament during the time.

What makes him so special is that in those matches, Keria often picks some disruptive choices like Lee Sin Support, Thresh Predator, … but still brings a certain level of effectiveness. Fans recently also found that Keria was actively playing Ekko support while training for Worlds 2021.

Keria is trying out Ekko Support at Korean Challenger

According to op.gg, Keria has bene playing Ekko support consistently and has a very high win rate (up to 74%) in a total of 19 games.

So what makes the champion so strong and how can Keria utilize him in the support role? Originally, Ekko was an AP assassin mid laner but he can also be used in many other roles such as top, mid and jungle. However, with Keria perhaps nothing is impossible when he applies the Guardian rune along with Locket of the Iron Solari as his Mythic item with an additional Hourglass to harass the enemy team.

Ekko has an exceptionally high burst damage when it comes to his combos: Phase Drive (E) + Timewinder (Q) and his passive Z-Drive Resonance. His ability to wave clear with his Q can also be very convenient when pushing the wave in the early game to help him roam continuously.

In addition, the skill set of him brings to League of Legends is extremely annoying thanks to the ability to create armor and stun at the same time (Dual-Gender Convergence W), including with his Chronobreak (R) helps him to set a teamfight very easily and can still manage to escape.

With Worlds 2021 approaching, many League of Legends fans anticipate T1 Keria bringing this champion to the event to add some variety to the game’s meta. T1, led by Faker, the Demon King, is also very determine to reclaim the title after a long absence from Worlds in recent years.