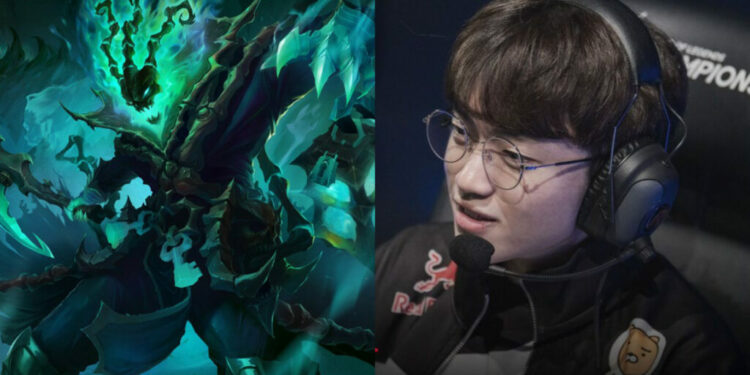 Keria made some surprising and fascinating remarks with his Predator Thresh pick in the third game against DWG KIA.

Keria shocked many fans with the performance of his Thresh in the third game between DWG KIA and T1 during the sixth week of the LCK 2021 Summer. He not only did not lie down, but he also has a KDA of 6/0/6. Keria’s Thresh, in particular, utilized Predator runes rather than Aftershock as usual.

Keria also revealed that he has only used Thresh three times this summer, but by building in the Predator style, he is referring to the playstyle of his colleague and competitor, Kellin from Nongshim RedForce. Keria, on the other hand, confesses that he dislikes this build and has only utilized Predator for Thresh approximately twice since he began playing League of Legends till now.

Keria and Kellin both utilize Predator Thresh, with the primary runes being Domination – Predator – Cheap Shot – Zombie Ward – Relentless Hunter, to maximize the damage that this champion contributes, as well as increased vision and movement speed outside of combat. This not only offers a significant amount of damage to the team, but it may also assist Thresh, a champion with an abundance of CC abilities, become even more effective.

On the second page, however, Keria utilized Second Wind – Overgrowth instead of Inspiration, as Kellin did. The champion will then be more comfortable in roaming around in laning phrase or battle for as long as possible with this rune.

It’s also worth noting that, unlike most Thresh supports, he did not purchase the Mythic item Locket of the Iron Solari. Instead, Keria rushed Legendary tank equipment Force of Nature with the money he earned from early kills.

Force of Nature provides an extra 350 health and 60 magic resist, as well as a 5% increase in movement speed. Furthermore, its passive, Absorb, gives even more stacking bonus movement speed and resistances when ability damage is taken. With this creative build, Keria has efficiently been zipping over the map, capturing prey after prey using Predator and Mobility Boots.

T1 content creator and commentator Nick “LS” De Cesare offered nothing but admiration for the 18-year-old supporter’s spectacular antics on Thresh. “Probably one of the finest Thresh performances this game that I can recall witnessing in recent years,” LS tweeted.

Keria’s innovation with Predator Thresh not only provides him with numerous benefits in team fighting and laning, but also provides T1’s Support with the ideal KDA, as well as receiving the MVP award with Canna. Furthermore, the victory against DK helps T1 reassert their position in the battle for the LCK crown as well as the ticket to the World Championship after a string of setbacks this summer.

T1 is currently fourth in the 2021 LCK Summer Split rankings with a 7-5 record and will face Afreeca Freecs in Week 7 on July 22 live on Twitch.