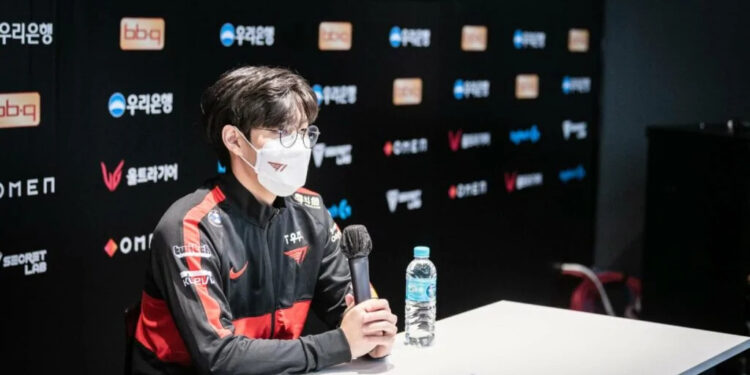 Oner, the T1 Jungler, remarked on the meta as well as the unresolved difficulties at LCK Summer 2022

T1 just won a difficult 2-1 victory over Kwangdong Freecs. After being outmatched in Game 1, the LCK champion rapidly changed there squad and accomplished the comeback in three games.

Oner was the driving force behind T1’s vital win. The picks with Lee Sin and Xin Zhao had helped T1 Oner bring many advantages to his teammates in both laning phase and team fights.

“We also thought Kwangdong Freecs were struggling recently, so I thought we’d win without much trouble. However, it seems Kwangdong Freecs play much better whenever they face us. I think they prepared well.”

“Anyone would have seen that they would fight often in the bot lane, so I thought the junglers should stay close. If I kept up with Jarvan IV, I thought our bot lane would easily get ahead.”

Surprisingly, when asked about the best jungler in the current meta, T1 Oner answered ‘Poppy’:

“I’m not sure without Hexflash, but with Hexflash, Poppy is the best champion in the current meta. Poppy’s jungling is decent, and there are lots she can do even if she didn’t scale well. With Hexflash, she can intervene in the lanes a lot too.”

Apparently, Poppy is very popular on the Korean server in the Jungle position, but she is only got picked by highly skilled players, most notably Challenger players.

As in the LCK, Poppy Jungler is pretty decent with a win rate of 66.7% across 24 games played, according to League statistics Games of Legends.

And, the reason Oner mentioned Hexflash is because this rune was banned at the Summer 2022 LCK because of the bug that caused the previous match between DWG KIA and Nongshim RedForce to be delayed by more than an hour, and had to be remade after the game had been played for more than 20 minutes.