Coach T1 Stardust believes that Western teams should focus more on improving their skill, rather than blaming League system 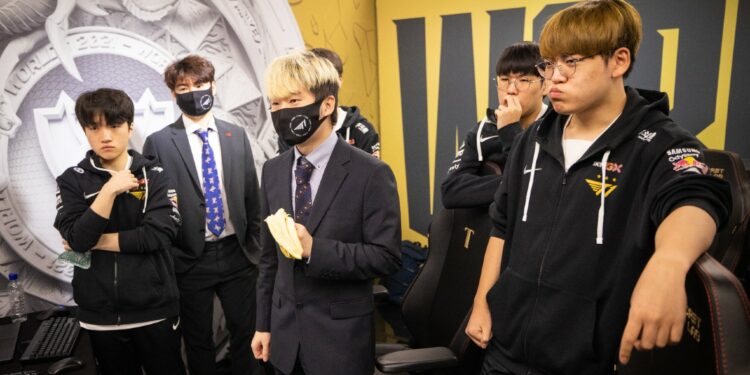 T1 coaches Stardust and Kim ‘Moment’ Ji-hwan feel that instead of complaining about the League system in North America and Europe, teams should focus more on self-improvement.

After Cloud9 lost to Gen.G Esports in the quarterfinals of Worlds 2021, Coach Mithy spoke about the unfairness of western teams in League. The coach said that teams in Europe and North America do not have many opportunities to play with other regions during the year.

“I think that the way League system designed is extremely unfair. The Korean teams get to scream against LPL, LJL and we’re hard stuck in either EU or NA.”

However, when asked about the issues following their team’s semifinal defeat against DWG KIA, T1 coaches Stardust and Moment thought it was the teams, not the system, that were the issue.

After the 2-4 C9 and 3-3 MAD Lions qualified out of the group stage, the Western had their worst-ever showing on the international level at Worlds 2021, failing to win a single game in the knockout stages.

Cloud9 and MAD Lions were both swept by Gen.G and DWG KIA, respectively, 3-0. Despite the fact that each series was close, the LCK teams were able to easily eliminate the Western teams.

As a result, many pro Western players have expressed their dissatisfaction with the LPL and LCK’s apparent superiority.

T1 Stardust: “Given the results they have achieved, I don’t think they can complain about the structure.”

Moment: “I think you have to focus on your opponent and adjust your play.”

While the discussion regarding League’s system is sure to continue, the issue of whether the Western team will be able to win against LCK or LPL teams in 2022 remains unanswered.