Faker is premilinary but T1 still made dominating games 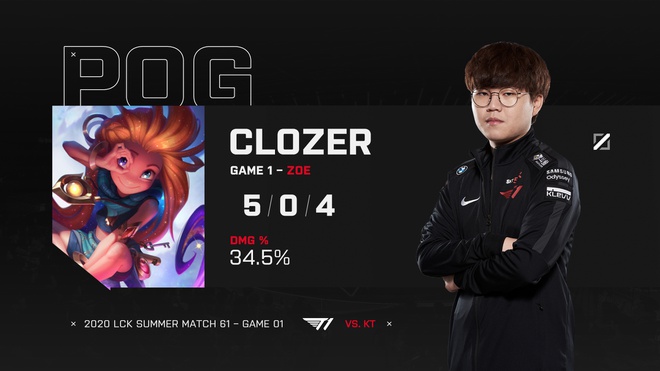 Hardly do we see Faker being preliminary like the amount of times he uses skin during his career. But today (31/7), the mid lane is filled up with ‘Clozer’, not Faker, though T1 has made their 2 games quite easy.

Lee “Clozer” Ju Hyeon – a young talent born in 2003 –  made an excellent debut in the T1 shirt, helping hí team to defeat KT Rolster with the score of 2-0.

On the afternoon of July 31, T1 encountered KT Rolster in  the Korean League of Legends Championship (LCK) Summer 2020. Right before the match,T1 announced  Clozer player will play in  mid lane instead of Faker. This is the first official match for a 17-year-old young talent as a T1 player.

Choosing Zoe in the first game, Clozer is the main source of damage for T1. At the minute of 7, he made a Triple Kill in the bottom lane, helping T1 to take back – to – back series in a bad situation teamfight.

The match was fairly balanced until the 25th minute. In a fight in the mid lane, T1 lost their bot lane couple, but Clozer and the other two members competed in ecstatic, knocked out. 4 opponents and take away the first Baron of the game. T1 continued to maintain their offensive position at a later time, gradually increasing the distance and ended the game after 37 minutes.

In game 2, Clozer used the champion Akali, although this is not a powerful champion (after thousands neft) in the current version. Although KT’s top laner, Smeb got 3 kills after 11 minutes, T1’s bot duo competed completely on the other side of the front line, helping Teddy’s Aphelios get the Infinity Edge after only 12 minutes.

The break down of the game was two consecutive fighting phases at 30 and 32 minutes. The huge damage from the Akali – Aphelios couple helped T1 get two consecutive sweeps, won the Baron and closed all the hope of KT.

This victory helped T1 consolidate 4th place in the rankings and get closer to the chance to the LCK Summer Play-off round in 2020. Clozer was voted to be the most valuable player (MVP) in the first game, marking the perfect debut of T1’s young talent.