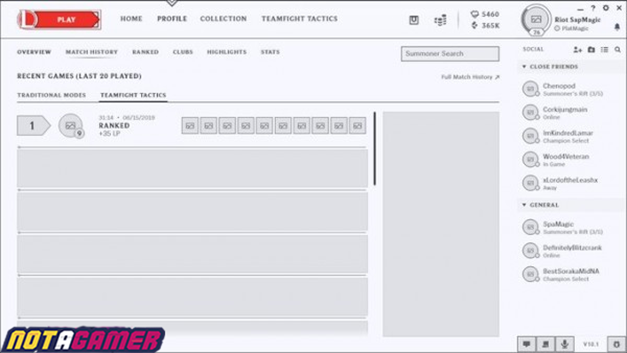 The latest regime of League of Legends, Teamfight Tactics was releases at all servers in the world. This is an extremely interesting mode, it creates a attraction for gamers since experimenting with achievements such as Top 1 views on Twitch or collapsing PBE servers.

Besides, he also wants to hear comments from players. Based on these suggestions, SapMagic has summarized and stated the goals for the “Match History TFT”. It is to record important moments so you can easily show off to your friends, and they also help you analyze the game better to improve your skills.

Finally, create motivation and excitement for players to participate in a harsh “TFT” match one more time.

In addition, the ideas that fall into focus include: Emphasizing the things you did right or wrong, Adding the “timeline” interface to show the moments in the game.

Currently, playing the Teamfight Tactics is mostly fun, because there are no rewards for winning (eggs, experiences, …). But it will soon be resolved in upcoming updates. In the meantime, prepare to welcome the “ranking” mode to help you fight your opponents’ brains and show off your “dignity”.