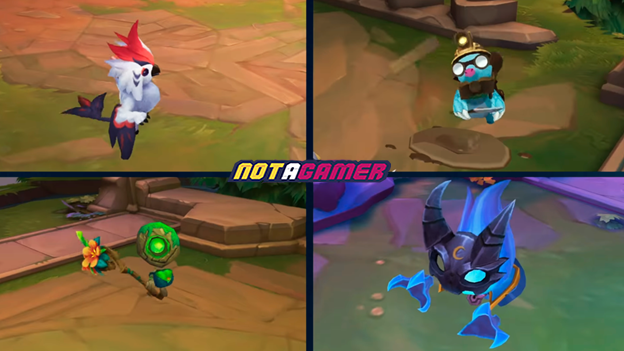 In the past few months, a new category of games has appeared and created a craze in the online game community – Auto chess.

This is a game that you will compete with 7 other players to achieve a single goal, climbing to the highest position. With easy-to-play gameplay, little manipulation, and many tactical and lucky elements, Auto chess quickly captures the player’s affection.

With the growing popularity of Auto chess, many game makers have noticed it and turned it into a mainstream game. Drodo – Auto chess developer has combined with Epic game, VALVE – with Dota Underlord, there have been many modifications to Autochess’s traditional gameplay and finally Riot – with the Teamfight Tactics.

From the first information about the TFT, many people are sure that this is just racing the Riot Games trend. They suspect that Riot only copied them all, replacing them with their generals and the same game as the original version. But, is it true?

Looking at TFT, it is no different from playing style as well as some effects of races (Nobles, Yordle, …) that are too similar to Auto Chess, so it is said that Teamfight Tactics is a copy game.

However, if you love League of Legends and is a true LOL gamer, do not be afraid to experience more about the Teamfight Tactics you will see very specific features that only this game will have.

If in Auto Chess your mascots only make it easier for players to interact with the heroes because it’s just a custom map, but the controls are limited to “Truth Arena” the “summoned beasts” will be accompany you in the rounds to get you the spoils to help you win in the game.

In addition, the Teamfight Tactics also gives players a easy system of items. The most unique items in TFT are Spatula shovels that will give you an extra buff of races or an extra slot if you have 2 Spatula, actually the game creates a much more competitive feeling among the “monsters “in the process of” robbing “in some rounds. In addition to the item, the development team also added many Class and Unit. The TFTis a lot of new combinations that you need to experience a lot to understand this place.

However, Teamfight Tactics is still there to improve things to give players a better experience. Animation fighting between chess pieces is really hard and not smooth. It is very difficult for players to follow a round of battles because of the superficial. Next is the interface that displays the necessary information, new players approaching the TFT will find it extremely difficult to keep track of the size purchased in their queues and right-click to see the information. left mouse button only to move – is mouse manipulation convenient?

My personal is: NO! No matter what mouse click, the information for the viewer is easy to observe and should show the energy bar as well as the recovery time. Next is a “feature” that is unintentional or intentional but very annoying in the TFT when you have the maximum amount of flags on the board you cannot insert one more from the queue waiting for the board, the This is really annoying because when you want to add another army or change a champ on the chess board but you forget to let another chess piece out, it cannot be replaced and the system keeps telling you an error, a real experience The bad thing is that you can’t work quickly during the game’s climax.

The biggest big grief is the extremely beautiful skins in the legendary alliance not applied in the Teamfight Tactics even when leveling up – really this is one thing that the LOL community wants Riot to listen to and receive ideas, even if just for the skin you own in the TFT are a reasonable option.

Finally, in my personal opinion, this is Riot’s smart and groundbreaking step – it works well in retaining the value of making an attractive Auto Chess but also doing well in self-service. locate yourself, create your own value of “LOL chess”. You will have tense tensions, faster-paced games and a “chess” game that uses the images and moves of your favorite champions.