Teamfight Tactics: Three new map models are designed based on inspiration from the League of Legends Universe 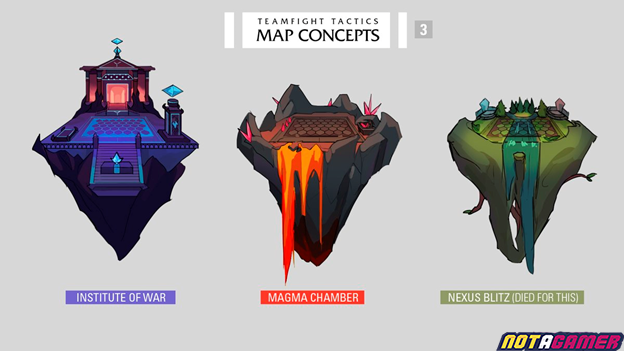 These new interfaces will increase excitement and experience in matches at the Teamfight Tactics.

The interface is always an important part of the game experience. And while Summoner’s Rift develops skin elements to make a difference for players, the Teamfight Tactics needs different map interfaces to keep the battles from being boring and confined to an old chessboard.

And recently, Walther “Nebura” Song has designed several new interfaces to increase the player’s experience and excitement in this mode.

Currently, there are only a few colorful themes for the default interface of the board, and they only make the board a little different. Runic, Arrowhead, Rift Arenas are pretty colorful themes. However, they look quite boring compared to expectations.

So Nebula has designed three new interfaces inspired by different areas in the League of Legends.

The first interface was inspired by the Battle Academia universe, originally the headquarters of the League of Legends – a core organization of Valoran, specialized in summoning warriors according to the old legends of the game. At the Battle Academia, countries in Runeterra will send their greatest warriors to fight political battles on Summoner’s Rift.

The second interface is called Magma Chamber with lava covered. This is a simple design but also quite striking with a dazzling color tone.

The final interface Nebura made was the Nexus Blitz, which was an experimental game mode released by Riot but was locked to continue testing “or was forgotten and removed from the League of Legends”.

It would be great for each player to have the opportunity to own their own interfaces and the interface will change as the player moves from one “chess board” to another.

However, unfortunately, this mode is only in the testing phase, but hopefully after Riot can stabilize the game, they will embark on changing the interface to enhance the gamer experience. .