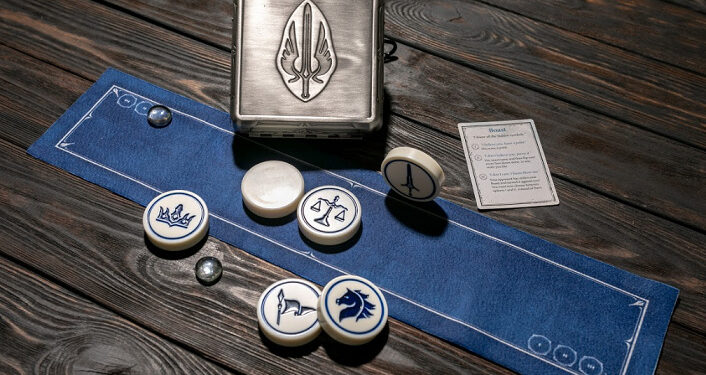 After the release of Mechs vs. Minions, Riot now has given out their second game, this time it is a much smaller game – Tellstones – King Gambit.

Tellstones is a board game, which requires players to actually play offline, be interactive, and have fun during the pandemic crisis instead of going online. They also made a board game called Mechs vs. Minions, but because of its price and weight, further region players have minimal chance of getting it. So now they decide to create a much smaller, faster game called Tellstones.

The game comes with a very small box that can be put in a bag, a purse or anything that you are carrying. The game length allows you to bring this game up at any party, any dinning time or even use it before you play a heavy board game.

In order to win this game, you have to use your wit, your memory and even deception to outcome your opponent.

What is in the Box?

The game comes with:

The game’s length is 10 – 20 minutes, 2 – 4 players, and is recommend for players older than 14. All the components are pretty nice and shiny as they use a metal box and big, thick, and high quality stone pieces.

Even though this game has a small box and a fairly simple rule, every single rule has a lot of details and can be explain much further to create a strategy in-depth sight. If you are interested in learning the game and also how to win the game, we will make another article teaching and explaining how to be the best Tellstones players.

Instead of reading the rule online, definitely check out the tutorial made by League of Legends themselves. They make a quick summary of how to play this game and is enough for you to play your first game.

In this game you only have to do 2 things: try to remember exactly which symbol is hidden under that stone and make your opponent confused enough so that they forget the symbol. A lot of Action in the game will help you to mislead your opponent, or even, mislead yourself.

The game ends when you slowly slowly reach 3 victory points or you do an aggressive action if you are cocky or way too behind, but be aware, this action has a consequence, you might lose the entire match if your opponent is still able to remember all the hidden stones.

As the game website also points out: “Tellstones: King’s Gambit is the unforgettable game of bluffing, strategy, and recollection from the world of Runeterra. To win, you’ll need to focus on playing the player, not the game.”

Tellstones is a brand new game so currently, it can only be purchased via their own website, in the future a lot of retailers will bring to your region so don’t be worry if the shipping fee is way too high at this point. The game will cost you 30 USD, which is fairly high for a small game but when compared with the high-quality component, it might worth the extra penny that you are spending.

In our opinion, Tellstones is going to a blast for your group of friends. Riot has learned from their past, Mechs vs Minions was way too heavy (weight and gameplay) to make any casual gamers discourage and turn away. Tellstones is quick, fun, and can be played while doing other activities. Also if they are intending to add further expansions to this game, it would be a much easier task for them, and for gamers – it would be cheap to purchase.

So, what do you think about Tellstones? Will you buy this game and enjoy it while watching Worlds 2020 with your friends? Share your thought under the comment below.