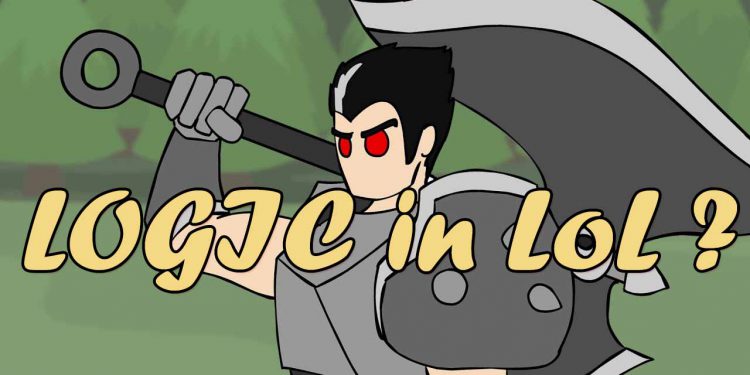 1. Nami is a mermaid who can wear boots

Many people, after witnessing Cassiopeia’s rare logical case, ask why Nami can still buy boots like many other champions.

Born a mermaid living in the ocean, she could not only breathe and move on land like a normal person but also had the privilege of buying boots. A creature that was once a normal girl of the noble family of Noxus did not enjoy this privilege. What a pity for that girl!

2. Sona mute can still make a sound from inside

According to the plot, Sona is a girl born mute innate and abandoned in the orphanage of Ionia. But strangely, this girl is not mute like Aphelios but can still emit her crush very often in the match. Feeling that depriving the voices of these two champions is not enough, Riot also allows other champions to comfortably silence their opponents.

3. Lee Sin is blind but he is still blind by Teemo

Lee Sin when he once destroyed his eyes for summoning destructive power. Despite the irony of fate, Riot still allows champions like Quinn, Graves, and Teemo to impose a blind effect on him again. What the… Riot Games?

4. Malphite is still petrified by Cassiopeia

Malphite meteorite, which is one of the champions made of pure stone that gave birth to the galaxy and has existed for a long time. But with just one ultimate, Cassiopeia can petrify even a genuine stone.

5. Taliyah is a Stone Witch but is still hit by Gnar

Famous for her control of stone, she can summon all types of rocks to attack as well as build a solid wall separating the two battle lines. But with Gnar this stone witch is still nothing and Riot still let the Yordle comfortably throw a large rock in the face.

6. Brand is the god of fire but still died of ignite

Brand is a caveman creature known as the Burning Vengeance, similar to Annie – the Dark Child, both of which have the ability to control and use flames to fight. But despite the origin of his descendants related to Runterra’s first fire, both could not avoid the absurdity when they could not fight the Ignite – just a spell …

7. Ahri can charm all champions

There is a truth that the items used in LoL are for reference only for fun and do not exist any logical. With a robot champion who specializes in using fire and rocket and machines like Rumble, he should be designed as a tank champion that can buy equipment such as Sunfire Cape or mace types to knock on the head powerful opponents, in the shape of a bunker machine.

However, making him a magician and item like the Rylai’s Crystal as his main items, makes him an unwilling hybrid and the concept of freezing by extremely peculiar fire gun technology was officially born.

9. Gragas drank the Explosive Cask but it was okay

If not involved in League of Legends, Gragas will be a businessman in the world wine industry when the number of barrels he uses may be more than dozens of current winemaking businesses. Although he only brought one barrel of wine from the start of the match, he threw, placed and exploded nearly hundreds of barrels in a single match. Not only did he throw away the barrels, the bastard continued to drink explosives at him but didn’t explode.

As you know, the Freljord is a land of ice and cold. But the female champions here all have extremely skimpy outfits like Ashe’s short skirt. Meanwhile, with the men, Olaf,  Tryndamere and Braum, in turn, wore blazers.

The ADC is one of the most important classes in the game, but all they can buy is logically in the store for only … three items. The gunner has always used equipment such as Infinity Edge, Trinity Force, Stormrazor … While most of the gunner’s weapons are guns, crossbows or bows, they have to accumulate money to buy all kinds of … swords.

From the Doran Blade to the Long Sword, even buying Dagger and Pickaxe … it became quite absurd. Riot should produce or reshape the current gunner items to make them more logical.

12. Champions with planes, mounts are slower than Master Yi

If you compare, you will find an absurd surprise that the aircraft or even amount will make you a lot slower than jogging. And an alcoholic has a faster travel speed than a pilot piloting an aeroplane. It is true that miraculous truths can only be found in League of Legends.

13. Graves must change bullets while other gunners shoot like machines

For the new players of League of Legends, surely they can not witness the golden age of this champion 2 bullets. Before turning into a jungler like the present, Graves was shaped as an extremely strong and perfect bot lane. Because he could not nerf his strength, he became the first gunner to reload after just 2 normal attacks. Moreover, if you pay close attention to Graves has 5 bullets and he can fully load up to 5 at once, according to the logic of the Shotgun gun Riot made. What a blatant and utterly unjust lie to Graves.

14. Karthus is a god of death but is still killed

Created an extremely powerful storyline with the ability to master the black mist and manipulate the souls of the dead, but entering the game Karthus is one of the goals that all champions can kill. Not just the champions. This grim reaper is also particularly afraid of the jungle monsters when they can pounce on him mercilessly at the beginning of the battle. Perhaps the grim reaper and the immortal like Sion and Tryndamere are accustomed to the unreasonable coming from Riot and should bear the fate of being.

15. Maokai uses his own compatriots as weapons

In League of Legends, Maokai fights against the unnatural monsters of the Shadow Isles. After a magical disaster destroys the homeland, it is lucky to survive thanks to the water of life in the core of the tree and become a vengeance.

Maokai joined the fight in the Summoner Rift to complete the exchange with the Majoris Secret Service, helping to find a way to transform him into an ordinary tree and ensure his fellow humans would not be transformed. However, when entering the match, Maokai used his young plants as weapons …