League of Legends: The Best Trio of ADC for Worlds 2020 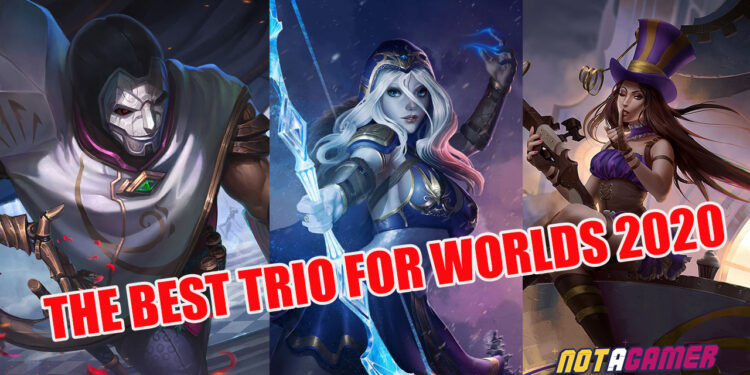 Caitlyn, Ashe and Jhin will probably become the best choices for ADC in the upcoming 2020 World Championship

Since the end of the group stage of pro leagues worldwide, the ultimate trio of Caitlyn, Ashe and Jhin has completely been dominating bot lane. Although champions like Aphelios, Senna or Ezreal are sometimes chosen, their influence on the whole match is not too considerable. So, why that trio is now so powerful? Let’s find out!

Everything started from patch 10.15, when Caitlyn’s basic AD and movement speed were buffed. This led to her ultimate power so that she could dominate her enemy laners no matter who her enemies are. The problem of pro leagues is, without Caitlyn, your ADC will totally be beaten in his laning phase, lose your control on the bottom side of the map, especially objectives like Drakes and receive a defeat.

Because of that reason, champions like Aphelios or Ezreal are gradually losing their priority as they actually cannot handle with the enormous power of Caitlyn. Lastly, a reasonable solution has been found: using Ashe and Jhin to face with her.

Obviously, Ashe has become one of the best choices for ADC for the whole summer splits of pro leagues all over the world and when Caitlyn became a monster, another monster called Ashe rose up! The most frightening strength of Ashe is her versatility as her R can stun an enemy for a while and set up team fights. Moreover, her attack range is 600, compared with 650 of Caitlyn and it seems not to be a huge difference.

Another marksman of LoL, Jhin, has regularly been picked recently. Different from the stunning ability of Ashe, Jhin may counter Caitlyn due to his R – Curtain Call, which can narrow Caitlyn’s moving space. Once his R is activated, Jhin will prevent Caitlyn from moving too comfortably and give her four terrifying bullets as presents. In team fights, Jhin can use his R to force her to stay in bad positions that make her vulnerable.

Basically, Caitlyn, Ashe and Jhin are the three representatives from three playstyles of marksmen. Caitlyn has an enormous amount of damage, Ashe owns a lot of CC and opening team fights ability and Jhin can easily create the “battlefield”. With their outstanding power, this trio will be scrambled a lot in Worlds 2020. Besides, in the playoffs of 2020 LPL Summer Split, Caitlyn’s presence reached a peak at 100%!!!

Beside those champions, there are a lot more choices for ADC in Worlds 2020 but this will depend on teams’ strategies. With teams dedicating their resources to their ADC and that trio is all banned, Aphelios or Kai’sa is not a bad choice. If your team is needing tactical moving ability or effects, Senna seems to be a good option.

In conclusion, the trio of Caitlyn, Ashe and Jhin will continue to dominate bot lane for a while, at least before patch 10.19 is published and a big change will probably appear in the pre-season.