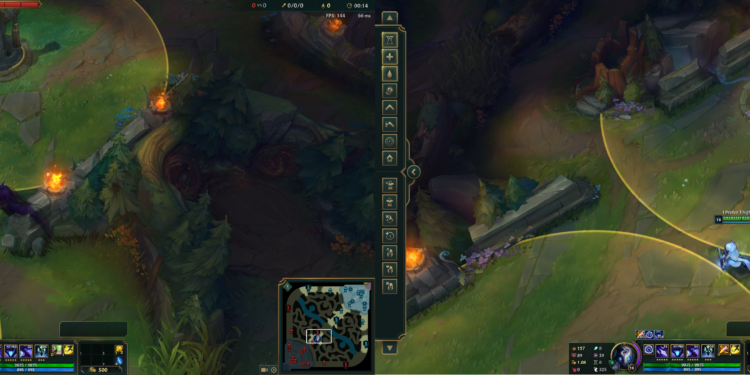 Is this the reason why the Blue team has a higher win rate than the Red team in League of Legends?

Not only are champions or item systems unbalanced, the fundamental elements of the League of Legends, such as minions, towers or Summoner’s Rift map, are not completely balanced. A few months back, the gamers proved that the Blue cannon minion’s attack range was 20 points greater than that of the Red team. Not leaving there, the League community has recently noticed the same issue with the turret.

According to “Deathcounter0,” a Reddit user, it would seem that the distance from the Blue team turret to the position seen in the image is 966,469 units and 1031,15 units for the Red team. The average champion hitbox is estimated as 100 units. Therefore, in order to attack the champion, it has to move towards the Red turret for 100 units. It turns out that, in this case, the Red turret attack range is 931.15 units.

On the other hand, this does not happen on the Blue side turret, its attack range still remains at 966,469. As a result, the Blue turret attack range has more than 35.3 points compared with the Red turret.

It could be seen that this is a negligible difference, however, these stats mean so much if you are a mid laner. Taking the above example, you can confidently push the wave high if you are on the Blue side. Whereas for players on the Red side, you can be suddenly ganked in the same way since the turret does not attack the enemy champion.

In short, the Blue team always has a bit of an advantage over the red team in terms of turret attack range. Perhaps this is one of the reasons why the Blue side has a better win rate than the Red side at the moment.