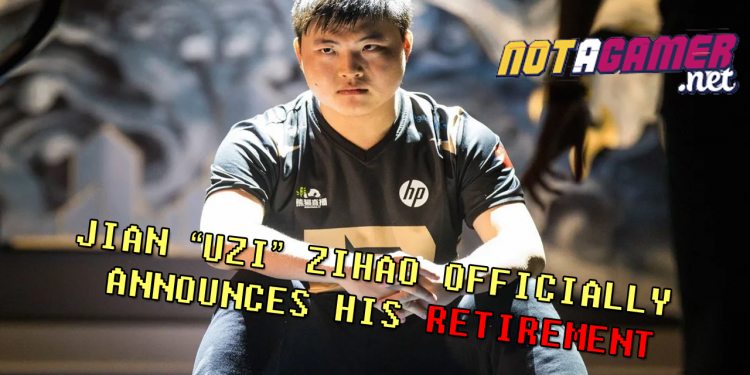 Uzi – The No. 1 symbol of Chinese League of Legends, officially said goodbye to the professional player’s career on June 3.

Recently, RNG has finally announced their farewell to their ADC – Jian “Uzi” Zihao. Ending their relationships lasted more than 4 years. Royal Never Give Up has thanked the No.1 superstar in the team’s history, and is also the greatest symbol of Chinese LoL.

Immediately after RNG posted a tribute to Uzi, on his personal Weibo account, the player officially announced his retirement, ended his career as a professional League of Legends player for nearly a decade. Contrary to the expectations of the fans, Uzi did not continue a new contract with any team after leaving RNG, and that means from now on, fans around the world will no longer see Uzi’s appearance on the professional stage.

“Hello, I’m Uzi. I’m sorry to announce you that, I – Jian Zihao, will retire from now on.

The pressure on competition, unhealthy activities, staying up late, fast-food … for a long time, I was diagnosed with diabetes during a health test last year. My glycemic index increased to 11%, compared to a safe level of 6.5%.

Over the past half year, I’ve had to change slowly, control eating, exercise to lose weight, combined with using drug, but things are still not progressing, even, being dependent on drugs makes my mind become worsening.

The doctor has warned me about diabetic complications, in addition to hand injuries, I realized that my health was no longer sufficient for professional play.

I would like to thank my fans who have accompanied over the years. Those who always support, encourage, support for me during the difficult days, really thank you everyone!

Thanks to my family and Aomimi (Uzi’s long-time girlfriend) for always understanding, tolerating and taking care of me.

Finally, thanks to Royal Never Give Up, where I was fortunate to be part of the team. Although I retire, I will always consider RNG as my flesh, and always cheer on my brothers in the future.

My journey has finally stopped, so thank you all.

Uzi started playing League of Legends professionally in 2012 in the Royal Club shirt, also the precursor of the current Royal Never Give Up. After a period of time playing for Qiao Gu Reaper, OMG, … Uzi returned to his “old house” RNG and sticking with them for 4 years.

Throughout Uzi’s career, he has experienced enough bittersweet. The most memorable is standing in the 2nd place of World Championship in 2013, 2014 and countless times “fall down” at the LPL Finals. However, he also succeeded in conquering major titles and awards, including two LPL Championships, the MSI 2018 championship with the ASIAN Games 2018 Gold Medal.

After all, we wish you nothing but the best, you are always our Legend!