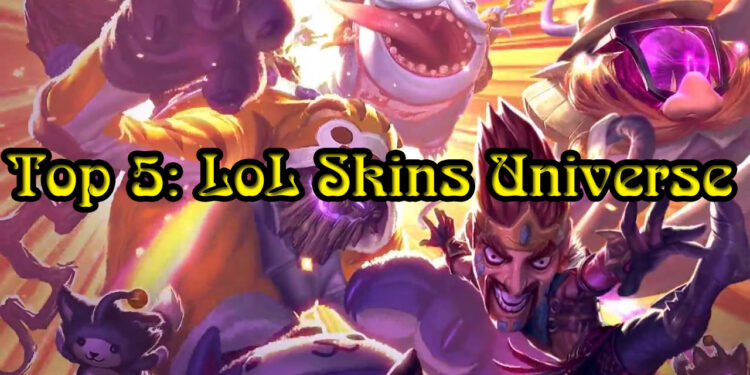 League of Legends is one of the games that attracts players by a lot of different elements. There are players who love the Biography and Lore of the champions, who like the way the game works, some prefer the images with the detailed investment of the publisher.

However, the skin for champions is one of the main for attracting most players. Day by day, the number of skins is increasing and the amount of skins have the same subject being repeated quite a bit, from which the concept of the skin universe LoL was born.

April Fools ‘ Day is one of the most special days of the Year of Western culture, people will give pranks, lies to tease others without fear of others having to be angry. To celebrate one of the days of fun like this, Riot Games decided to celebrate that with special skins.

Besides, April Fools ‘ Day is also a champion memory day for a very important character of LoL that is URF – a seal that has “died” unreasonable, not even any reason.

Riot also named the event URF Day, followed by a series of other skins related to the character as well as one of the very interesting game modes, URF. In contrast from Riot Games, URF was the strongest LoL general, but was assassinated by the Warwick.

During 10 years of development, with the exception of the years 2013 and 2014, Riot continuously created the special skins for this particular day, they were so much so that they can now form a distinct universe. The common point of these skins is their humour, which is a decent price everyone can possess.

Blood Moon is a series of alternate future/universe skins in League of Legends. Set in the mythos of Ionia, it features champions as Ionian demons or cult worshipers of the Blood Moon. Most of the knowledge of the native human beings here about Blood Moon is based on the legends of the beautiful and sacred land.

The blood moon is a mysterious spiritual world, haunted by evil spirits and there is always a terrifying red setting coming from the blood moon above. The story is about Reina, a girl who is haunted by evil spirits with a scary mask. She has created a mask for her own to face it. Because of this legend, the people or the devil in the blood of a face have their own mask.

With the exterior, the skill effect is “blood”, along with the reasonable price for a relatively good skin, everyone wishes to get a Blood Moon skin.

The pool party is a future universe of champions, the champions will wear their own swimming skins as well as items related to “water” to be their own weapons.

Unlike other skins universes, Riot Games created this universe to dispel the summer heat when playing games with friends and new comrades with the message of ignoring everything, to enjoy a wonderful summer

The cool skins, effect that creates a cool feel with the effects and sound of “water”, comes with a price not too expensive and lots of incentives events. Here are the skins there are a lot of gamers wish to own.

One of the skins to be carefully made by Riot, and advertised with new MV and game modes, the Star Guardian is the universe that attracts the number of players coming up with a story, another parallel world of the Universe LoL.

Cool skin, the color that represents each champion, this is the skin that many people want to possess at least one skin among them.

Project from the first days of releases received countless praise and positive reviews from the community. In addition, this is a series of skins made by Riot with a lot of short videos to advertise.

Context in the Project world is the future of the city of Piltover and Zaun, when the two cities have reached the highest peak of science, they strengthen humans with more advanced machine parts and since then many of the incidents have occured.

Before the unhumanity trials of the Project group, there were a lot of people who emerged to fight the break, determined to overthrow the group. From there, the fierce war does not regenerate continuously in every corner of the city.

Each of skins in the universe is changed by Riot Games from outer appearance to attack animations, skill effects, sounds and a lot of other things.