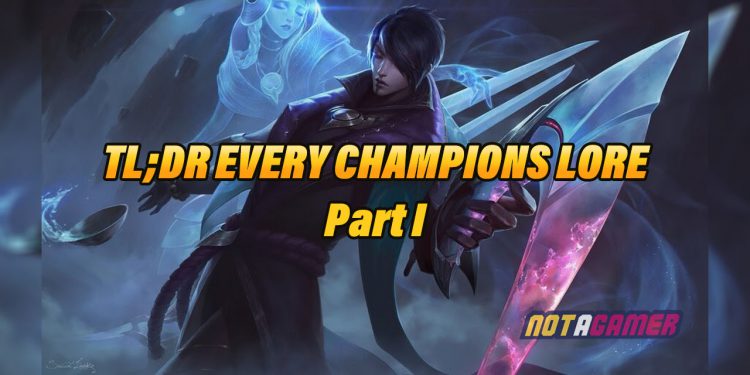 Are you interested if League of Legends Champions Lore, but too lazy to read every single bio/stories? Well, this is the right article for you!

Here are our TL;DR (Too long; don’t read) Champions Lore as of June 2020. Champions whose name starts with A and B.

Originally an Ascended, but now a Darkin, he was trapped within his sword, and now seeks to end the world in an effort to end himself.

A Vastaya from Ionia, Ahri fed on the memories and emotions of others, killing people in the process, and was viewed as a monster because of it. She has since had a change of heart and is trying to be better while also searching for other Vastaya like her.

A member of the Kinkou Order, Akali disagreed with their lack of action and left the order to bring her own balance to Ionia, becoming a rogue assassin.

Alistar was the mightiest warrior from the Minotaur tribes until he was brought to chains from Noxus. Noxus made him gladiator, but a young servant girl set him free. He then joined League of Legends to take final vengeance upon Noxus and find that servant girl.

First artwork of Reworked Udyr revealed in Legends of Runeterra

Their exact history unknown as they have become a mythological figure within Shurima, Amumu is a mummy that only seeks friendship but blights all those that near him.

A Demi-God of the Freljord, Anivia is the personification of the snow and frost who’s eternally reborn. She’s aware of a corruption within the land, and hopes to stop it.

A child mage with terrifying magical abilities, she was orphaned after accidentally killing her father and step-mother. She now wanders the outskirts of Noxian territory, lost in the innocence of youth.

Aphelios – The Weapon of the Faithful

Aphelios and his twin sister, Alune were both born blessed by the moon. Aphelios trains as an assassin to protect the faith and Alune trains to be a seer. Alune locks herself in the temple forever to give her brother magic weapons, see through his eyes. They never see each other again, but they will always be together.

War-Mother of the Avarosan tribe, while not personally believing it herself, her people believe her to be the reincarnation of Avarosa. She hopes to unify all the tribes of the Freljord and to create a prosperous era for her people.

A cosmic being who helped create the very universe, and is responsible for the creation of stars, he was enslaved by the Targonians. As the Targonians continue to lose focus through fighting each other and the Void, he hopes to gain his freedom.

Azir – The Emperor of The Sands

The last Emperor of Shurima, he was killed by his friend, Xerath, and disgraced by his hubris which led to the Shuriman Empire’s destruction. Recently resurrected after he helped heal his last living descendant, Sivir, he is now trying to recreate the Shuriman Empire and bring back it’s a golden era.

A mysterious cosmic entity, their reasoning, and history is unknown, but their motives are to keep the fragile balance and peace of the universe.

A golem built by Viktor, Blitzcrank now helps the people of Zaun and has growing sentience and fondness for people.

Formally a human mage and the apprentice of Ryze, Brand gained the powers of a World Rune, and now searches for the other runes as well, bringing down his hate upon the world.

Braum – The Heart of The Freljord

A near legend of the Freljordian people, Braum is simply a big man with an even bigger heart, giving his all to protect and help those in need.