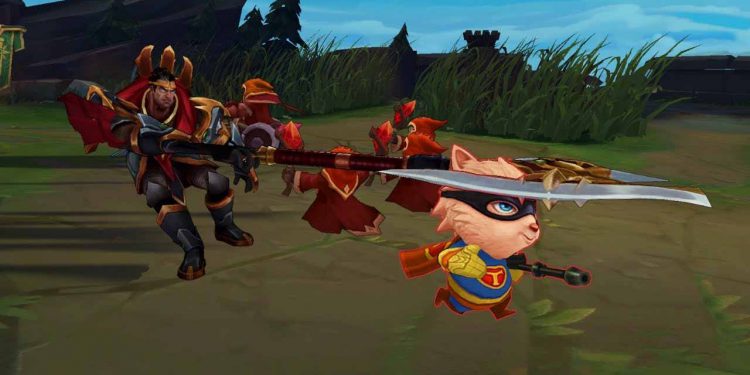 Escaping from the harsh rank of Iron – Bronze – Silver is always the constant suffering that unfortunate players always face each day. The more error-free processing phase with the same thinking as falling from Mars always makes the experience at these levels no less than hell. And after diving in that awful place, the gamer Brau87 has drawn the bloody rules for players who are still stuck in this bog because of wrong thinking:

Perhaps low elo players think that the blue-green smoke that puffed behind Singed’s back is an effect for fun? But they kept running after them without wondering why the blood kept falling.

One of the weaknesses of low elo players struggling in a mire is because they do not take the time to study the opponent’s skills and thereby find a solution.

Do you think Darius can’t attack you when blind? Think Running Fast can help you avoid Darius? Dream on! If you could do that, you wouldn’t be in this evil rank.

The top lane is extremely dangerous with the bushes and you do not have enough ward to plug all these strategic positions, and you can not react quickly to escape the intense attack of Darius is. If you are confident in the ability, just pick it and try, then Darius will not be able to fly up to cut the head.

3. Moo Cow Alistar is the ONLY Alistar

It was too unfair that Hecarim, Twitch, Yuumi even wore majestic suits of armour and splendid formal suits that were still themselves, and Alistar was only recognized when returning to full milk cow form his comedy.

The corollary of the skin was to reflect the true self of the champion, leading to other costumes such as humiliation.

Lesson learned: The ego is always there, bad also bad, buy skins for what to do.

4. If you cant see Evelynn she is behind you

You are invisible like a tail, always behind me.

Plugging wards and controlling vision is a luxury at low ranks, so detecting stealthy enemies is impossible, unless they reveal themselves, and once they do, it means you will also sleep well.

So if you see your opponent suddenly disappear, go behind and spin a use of skills on it. Lucky or bad.

“Your dad doesn’t need to plug his wards, he knows when the enemy ganks.” The culture of living in the dark is so familiar with hell-elo gameplay. Support never buys wards, even if Riot has generously given each of his two wards for free.

Lesson learned: If you want to reduce poverty and go to the city, you should light up your future first. So please practice plugging your wards in.

Must nerf Irelia or Akali

Irelia did not know what the previous life had committed a crime, nor did she know whether to create a career in order not to be saved or not, but most Western players discriminated against Irelia.

Whether or not holding Malphite ultimate into the air or Leesin Q is missing, the reason is still that Irelia is too strong.

At hell elo, the jung is a trash basket to vent anger, a black hole attracts all your sins, is the criminal of all karma.

Living in the jungle does not prevent the fool of the top guy, is in the forest that cannot stop the guy in the middle of the opponent’s turret, is the Jungle that cannot put the bot’s ward to avoid ganking. All the cruelty of the forest guy.

Know the cosmic black hole? Bard’s hole is gilded, but it is also better not to return, but better. Sliding is smooth, but maybe at the end of the road is not 300 gold but something scarier.

9. The other teams Yasuo is better

Life is not like a dream, anything good is not in turn to slurp. Sometimes due to human dignity is not enough, sometimes due to the fate set to stay in this rank for feng shui, so it is best to just face Yasuo directly to eliminate the aftermath.

Lesson learned: Yasuo is inherently a fear if it is not the fear of the enemy team, it is also the fear of his team.

I’m an independent person, I don’t want to rely on my friends, put the lanterns on, I have flash that I can use. Do you understand??