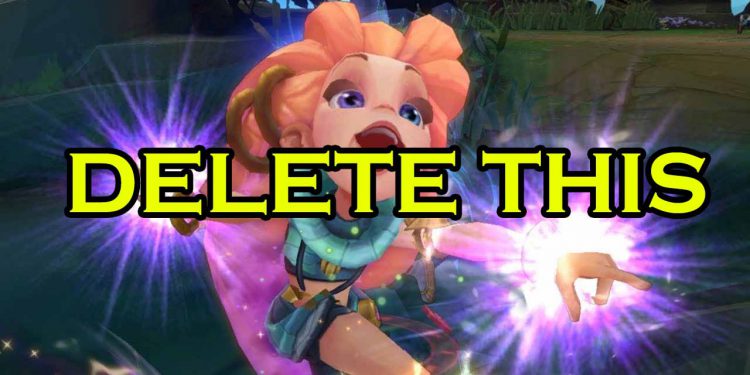 LoL champions cancer – Since its inception, more than 145 champions have appeared in League of Legends. Each champion owns a set of skills specific to his playing style. But there are a few champions that are quite cancer, especially extremely uncomfortable skill set.

Talking about the discomfort of the skills, the clown Shaco was the first name mentioned. Possessing comprehensive skills of an assassin such as stealth, shock damage or clone, Shaco is always one of the extremely annoying champions when falling into the hands of a good player.

This clown is highly maneuverable thanks to his Q skill. As the name implies, this is the trick that makes the opponent go crazy about it. Try asking bitterly when you are extremely intense solo with the opponent, then this clown stabbed you in the back and you died in pain. Just thinking about it makes me uncomfortable.

And yet, this clown can also use this trick to trick you. Chasing and chasing the fake Shaco, while the real Shaco is invisible in another direction. The pursuit of Shaco is indeed an extremely frustrating thing.

W is the most annoying skill in Shaco’s skill set. Possessing a large amount of damage and the ability to panic the opponent, this is a great tool for Shaco to transform his game. The ultimate also creates a shadow clown from Shaco to help maximize the amount of damage.

Besides, this clown’s last move can also help him to hide, outplay tactics as well as deceive enemies.

There was a time when Zoe emerged as the most hated champion in the Arena of Justice. There was even a signature gathering to pressure Riot to remove the champion from the game. But after all, this girl still stays and is on the list of the most uncomfortable champions in League of Legends.

Sleepy Trouble Bubble is one of the most annoying moves League of Legends, is also the reason why many people hate Zoe. This control ability can be used at very long range and bring extremely high efficiency, is a tool to help Zoe shock dead enemies from a distance.

And yet, W helps Zoe pick up the auxiliary spell that falls in the middle of the road. Having the advantage of blood, suddenly the Zoe picked up the Heal or the Redemption that fell from the soldiers and regained the lost, it was not a pleasant experience.

But mentioning Zoe, it is impossible not to mention the extremely shock amount of dame from Q. You can die instantly when you are wandering around if you eat an exact opposite situation from Zoe. Although Zoe’s item may not be adequate, the damage this girl causes is still impressive.

Referring to this name, the first thing that comes to mind is mushrooms, mushrooms and mushrooms. The mushrooms are the most annoying thing in Teemo’s skill set. Mushrooms everywhere, every corner makes your team meet countless difficulties.

There have been many situations where Teemo didn’t need to do anything to have a lot of kill points. Invisibility and acceleration from the passive and W are also things that help Teemo make better use of his mushrooms. Chasing Teemo back and falling into Teemo’s mushroom battle is the scariest thing for you and your teammates.

Zilean may not be a champion that can carry the team, but is a champion with a ability to turn a teammate into a monster.

Zilean is not a champion that can push individually, does not possess damage over time, does not shield or heal, but is an extremely annoying support champion with the skill set is even more satisfied the aforementioned thing. The ability to eliminate minions well with the control effect if detonating two bombs is exactly what can cause discomfort to the enemy.

With just a strong teammate, Zilean can be a launching pad to help them master the game. With the ability to accelerate allies with E, Zilean can completely cause an Olaf or a Cho’Gath to rush into the enemy team. In addition, Zilean’s ultimate is a great insurance if you crash too deeply into the enemy.

Unlike the other champions that appear on this list, Soraka is annoyed by the impressive ability to heal. As a fairly fragile champion, in return Soraka can completely be the team’s ambulance in the backline.

Your ADC can completely discharge the damage comfortably with extremely outstanding recovery of Soraka. In addition, her skill set also possesses the ability to poke uncomfortable as well as slow, mute. It can be said that this is a perfect support champion with his annoying skill set.