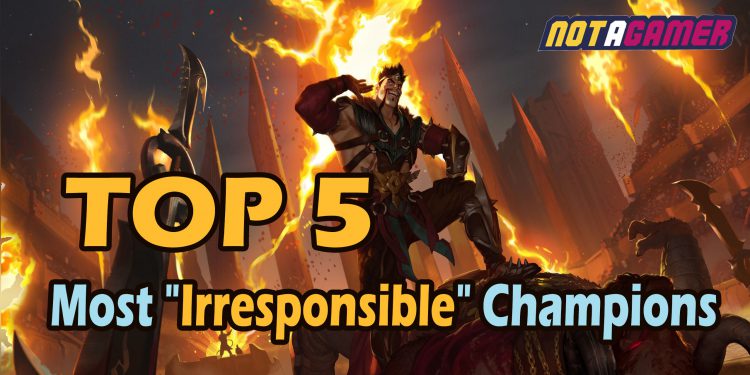 Within 148 different champions in the League of Legends, while most of them have a dramatic, proud background, however, some of them are just … not so great, or irresponsible.

Who are these irresponsible champions based on their lore and events? Let’s find out.

Unlike his brother – Darius who devoted himself to Noxus, Draven longed for recognition, cheering, and glory.

First, he turns the executions into his shows (If you watched “Awaken,” you’ll see one of his “show” with Riven). Then, He followed Swain to overthrow Darkwill – the former King of Noxus and seek greater glory. Regardless of the country, Draven’s desire is only to his personal reputation.

Lux – The Lady of Luminosity

Lux is the lady of a noble family in Demacia, where banned magic completely. However, from a young age, Lux exhibited a strong ability to control light magic. Thanks to her family status, she was not abandoned like any other mages.

Not much to say, surely most of League of Legends players know about this girl’s crazy hobby – destroying the city. Jinx not only does not do anything to help the society, she even destroying her city with her weapons as a hobby.

However, in Star Guardian Universe, she did help the team to fight the enemy. But the original Universe is what we are looking at.

This cute Yordle girl found her best friend Pix, after getting lost once. Pix even brought her the ability to transform things and herself.

Along with Pix, Lulu wanders everywhere to find her way back to Bandle City. However, everywhere she goes, she leaves a mess from her mischief.

Zoe – The Aspect of Twilight

Zoe is truly a proof for “A grandparent is old on the outside but young on the inside.” Well, in this case, she both looks young in on the outside and acts like a child inside.

According to her lore, Zoe is at the very least older than 1000 years as after her ascension she has was in the cosmic realm for a millennia before returning back to Runeterra.

This 1000 years old “young” girl after messing with the Lunari masters, was chosen to become the Targonian Aspect of Twilight. “Her Lunari teachers reported Zoe to be an imaginative child, but willful, lazy, easily distracted, and mischievous.”

What do you think about these 5 champions above?

Are there other champions that are irresponsible in League?