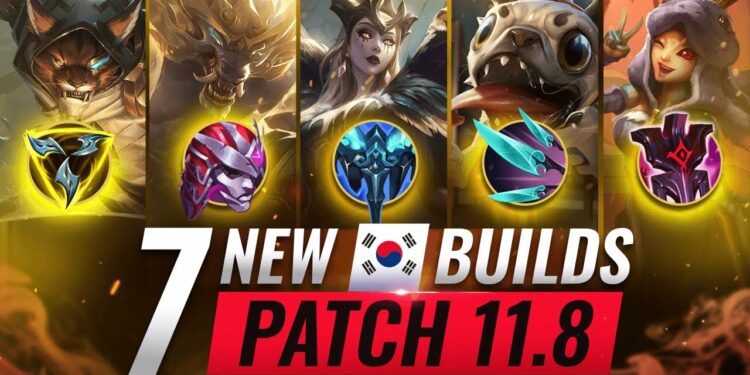 Because MSI 2021 is near, Riot did not make a lot of changes in League patch 11.8, however, several broken builds appeared to be useful in climbing rank.

After a long time out meta, Rengar is coming back on Top Lane as a Warrior. Players are building him as a regular Warrior instead of Tank or Assassin, and this build seems to be really powerful at the moment.

With Conqueror and his W – Battle Roar, he can regularly regen and become more sustainable in the Laning Phase or Clash. The Mythic Item for Rengar Top would be Trinity Force, and the core items are Sterak’s Gage and Death’s Dance. Players can consider Spirit Visage and Ravenous Hydra at the late game for better regeneration.

Rengar Warrior can make a huge pressure at Laing Phase, with tons of damage as well as great regeneration ability. His ultimate can helps him to escape immediately, make it harder for Jungler to gank.

In the earlier patch, Jayce is popular with Lethality Build, which is powerful in harassing. However, in patch 11.8, a brand new build will create a more surprising Jayce.

As usual, Jayce will start with charging Tear of Goddess and go right into Manamune. The special point here is his Mythic Item would be Trinity Force, which was recently buffed in patch 11.8. Trinity Force makes Jayce more sustainable on Top Lane as well as pushing Tower. Moreover, his combo will deal a lot more damage when dealing with other Tanky Warrior.

To finish this build, we recommend Ionia Boots of Lucidity, Serylda’s Grudge, and Chempunk Chainsword for reducing enemy’s regeneration.

In patch 11.8, many Tanky Jungle Champions like Zac and Rammus are buffed, Trundle comeback in meta as a hard counter.

Because he lacks of the ability to travel through obstacle, Phase Rush is recommender for better mobility. The core item is only Stridebreaker, which helps Trundle dealing enough damage at the early game while creating a lot of pressure on enemy team. Then the other items for this build will be the tanky ones, transform Trundle into a Tanker in late game.

Warwick is coming back with Jungler role, but there is a huge change in his build in patch 11.8

This build focus on half damage half magic. After finishing Divine Sunderer, Warwick should build Demonic Embrace and Zhonya’s Hourglass and save the Tank Items for the last.

With this build, Warwick can create enough pressure on ganks in the early game while become sustainable in the mid and late game. His damage dealing will not reduce overtime, in clashes he will be the real monster with tons of damage and regeneration.

About Runes, Conqueror is recommended for better regen, while Last Stand is really important for a comeback in any combat.

LeBlanc’s Q – Sigil of Malice was buffed in patch 11.8, this is enough for her to comeback on Mid Lane.

You would never want to be Rooted for 3 times while LeBlanc is performing her combo bursting you till dead.

Although Kog’Maw was buffed in patch 11.5 but he seems to be less prefer due to weak mobility.

And recently, a Support emerge to fix this problem, she is Nami. This duo is really effective while going with each other. Nami can heal Kog’Maw and protect him when he is using his far-range auto attack, helps Kog’Maw become more confident while dealing damage.

In patch 11.8, Kog’Maw will focus on Critical Hits, Immortal Shieldbow and Phantom Dancer will be his core item. With Lethal Tempo, he can deal tons of damge while under the protection of Nami.