TOP 7 strongest champions in each region in League of Legends that we were completely mistaken! 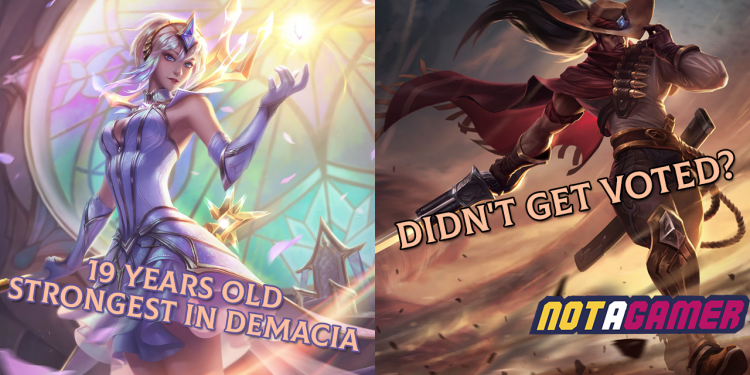 The Universe of League of Legends is a place composed of various regions. Each area has its own terrain and power. Many champions in the popular areas of Runeterra are regarded as the strongest in their own country who obtain inapproachable strength. Let us learn from the storyline of characters in the top 7 strongest champions in every region.

Demacia, considered as a powerful and organized nation with a glorious military history. The Demacian always think highly of the values of justice, honor, duty and take great pride in their cultural traditions. However, magic is not allowed here, if there are sorcerers or wizards, they will immediately get imprisoned and they will be under the control of the Demacian Council.

Demacia is also a famous country with many champions enjoyed by a lot of players such as Garen, Fiora, Lucian, etc. The strongest, however, are The Lady of Luminosity – Lux, and her guardian, The Colossus – Galio.

Lux is an innate genius sorcerer with a profusion of magic flowing through her veins. Because of her ability to control light and unleash an enormous amount of power, Lux can easily break the chains for Sylas even if they are made of magic resistance materials. Moreover, Lux’s real power lies in the fact that she is the only mage that can summon Galio. With his great size, he is likely to easily defeat an army to protect Lux as what we can see in the Cinematic Warriors 2020. Thus, Lux is the strongest champion in Demacia although she’s only a 19-year-old girl.

If Demacia is a brilliant nation representing justice, then Noxus has a powerful empire, whose name was widely spread. From the outside, you can see this is a country which is harsh, expanding and dangerous. Though, looking closely, you will see an unusually open society in which the strength and talents of its inhabitants are respected and cultivated. It is home to many of the most vicious champions, and most of them are under one man, Jerico Swain, the visionary ruler of Noxus.

Coming from the Noxus noble, he was the captain of the elite Darkwill’s army, and always a leader. However, when Swain was not awakened by the forces of darkness, he was quite weak and has been cut off a left-arm by Irelia during an invasion of Ionia. Since that incident, Swain has dominated the dark force, awake the demon in the eternal fortress and has used that power to regain his position.

Not just that, upon his return, Swain easily overthrew and defeated Boram Darkwill in just one night, enough to prove that he was much stronger than before. With dark power and great manipulation talent, Swain is the strongest and most powerful Noxian to be proved.

If power were measured by magic in other lands, then Bilgewater measured both the power of the wealth and the army. Maybe because it’s a place is known worldwide as the home of python hunters, gang thugs and smugglers, but this is not the place where the champions in justice appear.

Prominent in the Bilgewater region, one of the most famous guy for the resentment to lots of people that he caused, was the pirate king Gangplank. A merciless and unpredictable pirate, his reputation is so frightening that even make the toughest sailors got panic when they see the black sail on the horizon.

The pirate woman – Miss Fortune, Gangplank’s biggest enemy, rebelled by destroying Gangplank’s ship in front of all the people of Bilgewater, but he was safe and survived, despite his body damage and defame, he is still the most dangerous pirate with strong potential and his extremely powerful army.

Freljord, a cruel and arid region, where people were born to become warriors and had to survive hardships. Besides, the Freljord tribes were often regarded as wild, rude and barbaric by their neighbors while they knew nothing of their ancient traditions that shaped people here.

Thousands of years ago, the alliance between the three sisters: Avarosa, Selryda and Lissandra were shattered in a war that threatened all of Runeterra to turn the Northern Land into a chaotic winter. This land now is in a pre-war period where three powerful forces pursue their own principles.

The most outstanding of them is the ice phoenix, Anivia. In ancient mythology, the phoenix symbolized dragon-like strength and control. Anivia in the Freljord, is a representative of the coldest winter, the embodiment of the ice power and an ancient Freljord guardian deity. She can harness this land’s strength and rage, summoning snow and icy storm to protect her homeland from enemies.

Moreover, Anivia can be physically resurrected through generations and a new age will be formed each time when she dies. Thus, an entity that has control of both magic and nature, and multiple regenerations that no one could beat.

Come to the land that produces the four emperors of the League of Legends(Yasuo, Lee Sin, Master Yi, Zed) /trans: XD/ and the place with the most beloved champions, Ionia. Located around the Treacherous Seas, Ionia is made up of many allied provinces and cities scattered across a vast archipelago known as the first land. Denominations live in isolation and are divided into righteous and antagonistic factions, even though each sect has a different source of power but can not be compared to an individual, that is the Enlightened One.

When people mention this place, we usually think of the Ionian Army Marshal, Irelia. However, we did not know that Karma was the leader of the resistance forces of Ionia, always side by side with Irelia, supporting each other to repel the Noxus invaders. Karma, an incarnation of an ancient Ionian soul that illuminated the spirituality of every generation of Ionia, was considered a symbol of the origin of the first land and also a powerful spiritual soul that could be reincarnated for thousands of lives.

Furthermore, when Karma was angry, she was able to unleash her divine wrath in one breath can kill a ship and the whole crew. Karma is undoubtedly the strongest in Ionia with such a devastating force base on the lore that nobody can, even the four emperors.

Mount Targon, far from human civilization, is a place inaccessible to anyone but the most determined. There are many legends on Mount Targon, and like every other mysterious land, this place is mentioned as the beacon of a dreamer, a fool, and an adventure; it is also the refuge of the sun and the moon demigod. The strongest creature on the top of this mountain, however, is not a human, but an entity acquired by the Targon’s people, named Aurelion Sol.

Aurelion Sol is a powerful entity that existed for a long time before mankind appeared in the world of Runeterra. Born from the beginning of creation, he and his fellows roam the vast universe in order to weave magical worlds, sparkling on that vast curtain, erase the emptiness and bring joy to all who watch it. Basically, Aurelion Sol is the creature that created Runeterra and has the power to destroy the entire universe with its own power, so that the dragon god is not only the most powerful creature of Targon, but also the most powerful in the Universe of League of Legends.

In Bandle City, for most of the residents of Runeterra, the Yordle is nothing to be afraid of. The city of Bandle is rumored there is home to a lot of hiding legends, to be a most mysterious spiritual place filled with weird artifacts from all dimensions.

Despite being a friendly town, as well as the Yordle race, is no less a mysterious and powerful place than any other. Prominent among these Yordles, there was a former guard of Moderkaiser, the little demon name Veigar. He was a Yordle who had been seen as an instrument of the demon’s armored since he was able to extend the life and spread fear for the Moderkaiser Empire.

Despite he was rid after that, Veigar did not know much potential of his power. He has immortal power, trength increases like the way he farms Q in-game, as well as being able to summon up the wrath of the stars, strikes the enemy’s head, or trapping them in endless moments, is enough to prove that he is the strongest magician in this town.

And for you, what champion do you think is the strongest in each region? Let us know!