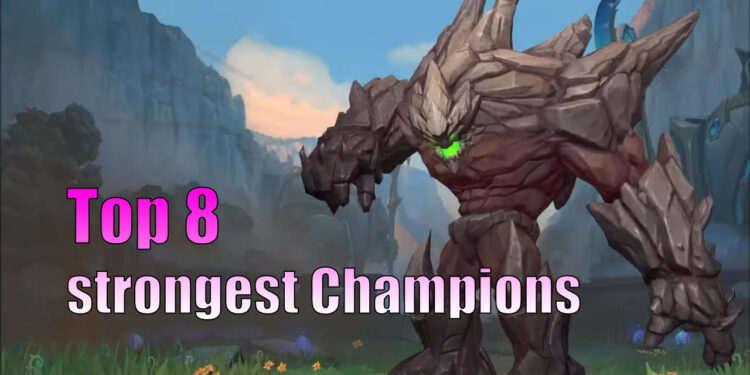 Depending on our experiences in Open Beta, today we will discuss the top 8 strongest champions that are predicted to dominate the meta in the next patch.

A really strong Champion on Top Lane, Jax continue to receive bias from Developer and has all the quality a Warrior need. Look through the list of Top Laner, there is not any Champion as perfect as Jax with his ability to trade-hit and solo extremely good.

Moreover, when being ganked by the enemy’s Jungler, the narrow topography of the map in Wild Rift helps Jax escape super easy with only one Q. In the later Phase, Jax can maximize his strength with his ability to AoE Stun from Counter-Strike while becoming tankier with Grandmaster’s Mind. With all mentioned above, Jax is one of the first choice to pick on Top Lane.

A big opponent for Jax on Top Lane is the one we are familiar with on Summoner’s Rift – Darius. For a long time, this Champion has been a demon on Top Lane with many shining circumstances in Combats. In Wild Rift, Darius can keep his Passive – Hemorrhage and he becomes another monster in the mobile version.

Not only has the ability to burst huge damage, Darius also has the ability to clear waves really fast which not many Champion can do. Darius is also suitable to Combat rapidly like in Wild Rift, however, he can still be kited by some Champions. So that, if you meet a difficult Champion, just attention on farming or roaming with your Jungler.

For Jungle Role, we will see a less popular name in Summoner’s Rift – Evelynn, she is one of the hot-picks in Wild Rift for Jungle position.

This scary assassin can burst damage extremely fast and escape peacefully like nothing has happen with her Passive or Ultimate. As a result, Evelynn is being picked rapidly in every match, if you did not have the chance to pick her, you should learn how to counter Evelynn.

The next Jungler we recommend is Camille, she is a really powerful Champion with the ability to approach and finish her target just in a blink. In addition, she does not have much damage like assassins but she can adapt well along with the match.

Regardless of the enemy is AP or AD, Camille can deal with them both due to her Passive. She can also deal tons of True Damage so that she can be a terror for Tankers. In addition, her Crowd Control abilities can help her approach opponent’s Carry even they are standing curled up. This is her bright point which Evelynn can not compare.

There are many discussion about if Yasuo was still our “God” on Mid Lane.

However, despite not flexible as Yasuo, Orianna seems to be a stronger Champion on Mid Lane with effective abilities in Combat.

However, Orianna is not weak in Laning Phase. She can clear waves really well while the amount of shield she creates with the ability to poke can disturb enemy rapidly while Laning Phase. Moreover, the AI assistant in aiming skill in Wild Rift is super smart, which can help Orianna cast her skills precisely. Because of all above, Orianna is truly one of the strongest Champions in Wild Rift.

Besides of Orianna, Malphite is also a strong Champion in Combat in both Summoner’s Rift and Wild Rift. His Ultimate is super strong in every circumstance, moreover, he is also super tanky even with AP build.

Whenever his Ultimate is recharged, he is extremely dangerous and able to finish his target just after some poking Q. Because of easy playstyle and thick armor, it is really hard to kill Malphite and he is a potential Champion in Wild Rift.

In Wild Rift, without his counter Leona and Alistar, and it is really easy for him to perform his Combo accurately Blitzcrank is now the strongest support. Moreover, this steam machine can also cast many disable on enemy while has a quite tanky armor. He is truly one of the strongest Champions in incoming meta.

There is no doubt for this OP Champion.

With the help from Aiming Assistant in Wild Rift, Ezreal can cast his abilities accurately, he can burst damage really fast and rapidly.