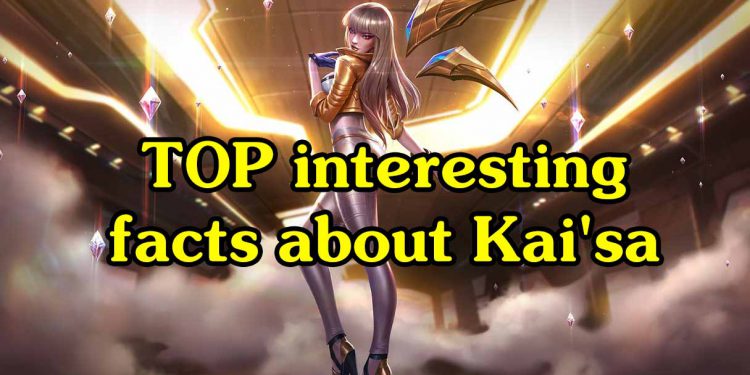 ADC is considered to be the most perfect in League of Legends and is also one of the few champions that can keep his performance for a long time in the most volatile champion class, no one else is Kai’Sa.

So, let’s join us today to find out the top interesting things about Kai’Sa that you may not know in League of Legends.

Kai’Sa is the next generation champion released on March 7, 2018. Is the 140/148 champions in the current League of Legends. Despite being born late, Kai’Sa is still ranked as a “darling” in League of Legends, having been updated his skin very regularly since his debut. As the first champion to be released in 2018, Kai’Sa is currently only 22 to 23 years old in terms of storyline and launch time.

In addition, Kai’Sa was also the first father-son relationship in League of Legends when she was Kassadin’s biological daughter. Unfortunately, the Void has transformed them to such an extent that both of them do not recognize each other and currently both can only vaguely sense the opponent’s presence.

Perhaps the most remarkable thing about the fearless hunter of the Void known as Kai’Sa is how unremarkably her life began. She did not descend from tribal warriors hardened by generations of battle, nor was she summoned from distant lands to fight the unknowable menace lurking beneath Shurima. Rather, she was just an ordinary girl, born to loving parents who called the unforgiving southern deserts their home. This was where she would spend her days playing with friends, and her nights dreaming about her place in the world.

In her tenth summer, the young girl Kaisa’s destiny would be changed forever. Had she been older, she might have noticed more of the unusual events that had begun to unfold in the villages—every day, her mother urged her stay home, for fear of strangers wandering the land, demanding tribute to dark powers below.

Kaisa and her friends did not believe it, until one evening they came upon a pen of sacrificial goats bought from nomad herdsmen. Using the knife her father had given her on her eighth birthday, she cut their tethers and set the animals free into a nearby canyon. It seemed like a harmless prank, until the unthinkable happened. The ground began to quake, flashes of light scorched the sky, and the children ran for their lives.

The Void had been awakened. A great rift split the bedrock, swallowing up Kaisa’s village and everyone in it, leaving nothing behind but sand pierced with twisted columns as black as night.

Interesting dialogue and interaction of Kai’sa

As for the dialogue, Kai’Sa is the only female champion with a typical male voice with the low, husky tone, not only that for most of the dialogue, sounds that Kai’Sa emits are present. the interface of symbiotic crust. Voice when selected: “Are you the hunter … or the prey?” Voice when banned: “You wouldn’t last a day in the void.”

Besides, despite being trapped in the Void for years and Kai’Sa is no stranger to the hideous creatures that this mysterious space has produced. However, in her lines, she only had special interactions with Kha’Zix and Kog’Maw, and the remaining Void creatures were the same.

Voice for Kha’Zix: “I know your tricks”. This proves it is possible Kai’Sa has fought the Kha’Zix before when he “drifted” to Runeterra and caused a grudge against Rengar. In contrast to Kha’Zix, despite being in Void for many years, it seems Kai Kai has yet to see a creature like Kog’Maw.

She was quite surprised and disgusted when she saw Kog’Maw and had to say, “What are you?”. This raises a doubt about the origins of Kog’Maw, is it a purely Void? In addition, she constantly feels the bloodline when confronting Kassadin with statements like “Father, Could it be the truth, …”

Kai’sa’s unique features in the process of appearance

Although only a champion appeared in just over 2 years since Kai’Sa debut has emerged as a top gunner thanks to a large amount of damage and the ability to cause very mutations. Along with Xayah, the two have become the top hot pick in both the rank and the professional league in the world.

Back in the past, the original idea for designing Kai’Sa was created by Larry “TheBravoRay” Ray.

Originally, Kai’Sa was created according to the idea of ​​being a member of Lucian’s team but was corrupted among the monsters and turned into a merciless predator.

Kai’Sa symbiotic is also inspired by many comic books and video games, especially Sarah Kerrigan in Starcraft and Ryuku Matoi in Kill la Kill. In addition, Kai’Sa is the only pure ADC in the game with evolved skills and is the only sniper up to the present time capable of creating armour for himself.

As mentioned above, Kai’sa and Kassadin have a father-son relationship. Although both can only recognize each other in a very vague way, for Kassadin and Kai’Sa, they always consider Malzahar as the destroyer of the family and a terrible danger for Runeterra.

Previously, Malzahar was still able to escape Kassadin’s hunt, but when Kai’Sa returned from the Void with a new form…that would be a different story.

Highlights in the Kai’s skins

As mentioned at the beginning of the article, Kai’Sa is also classified as a darling of Riot when she has a very attractive default appearance and is very meticulously cared for on each line even though most creatures come the “Void” are all associated with fairly coarse and eye-catching images.

It is this default skin of Kainala that also made her appear in MV Warriors, with super epic fight scene.

With the K/DA Kai’Sa skin, she is a member of the K/DA group – the K-POP group in League of Legends to life as the main dancer. She has a nickname is Bokkie, height 169.6 cm, Pisces.

Kai’Sa is voiced by American singer Jaira Burns and especially she also has for herself a lot of interesting things like a true female idol like fluent in Chinese, Korean, English, South Africa, passion. singing and cooking, etc.

IG Kai’sa to honour Jackeylove at Worlds 2018. Kai’Sa was the 4th champion in the history of the year and was chosen to be the World Championship skin that year. After Jhin 2016 and the duo Xayah – Rakan in 2017. She is also the only female ADC currently apart from Xayah with a pair of skins with Rakan.

In addition, with the launch of Arcade Kai’Sa skin, she almost blew away all opponents to become the champion with the fastest average skin release time: 95 days. She was also the first champion to have a Chromas at the time of launch.

In addition to the teaser of Gun Goddess Miss Fortune, Bullet Angel Kai’Sa is also being wanted for an extremely large amount: 860,364,000. However, Miss Fortune’s wanted money is many times larger, reaching more than 33 billion 680 million, which is an impressive figure between Riot’s two beloved children.