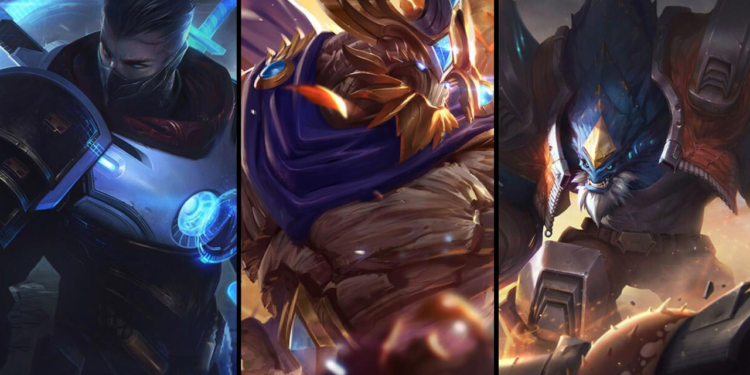 Beginning with the top lane we don’t have too much to talk about aside from some specific champions that are running absolutely op and crushing. These three champions are Volibear, Darius and Camille.

Arguably one of the strongest builds on him right now is running press the attack and then purchasing an iceborn gauntlet and wit’s end. This build provides a bit of everything. It has magic resistance armor cooldown reduction some damage and even sustain vulgar’s w activates on-hit effects, meaning that wit’s end synergizes extremely well with him.

This is a rather oddball build when compared to most other top laners who either build a black cleaver or trinity force while volibear does fill a similar niche to many meta top laners. Don’t fall into the trap of building the exact same two items you’re used to taking on most juggernauts or bruisers.

As for darius, well there’s really not much to say, Summoner’s Spell : ghost was buff this patch and that was basically a darius buff.

Let’s be real here: ghost on darius is super strong and players are finding even more success with him than before. It’s no surprise that his ban rate has climbed above 40 percent in high elos and it’s going to remain there unless the balance team takes action. The bonus movement speed unleashes the beast as it helps darius players overcome his one weakness: his lack of mobility.  With enough movement speed, he’s an unstoppable solo queue star.

Camille on the other hand has come out of seemingly nowhere. Various balance changes have gradually opened up the top lane for her once again. She’s a great solo queue carry because of her versatile kit as well as her incredibly high damage output.

Although camille has been in and out of the spotlight, she’s begun emerging as a high performer. A big contributing factor to this is an optimization many high elo camille players have been making. They’ve been using grasp of the undying quite often. This keystone upgrades camille’s trading power significantly. It fits her hit and run playstyle quite well in the early game and she’s still able to hit like a truck with or without a keystone in the late game. When used alongside shield bash, grasp the undying can honestly feel pretty oppressive to play against. It becomes nearly impossible to win short trades against camille, and slowly but surely she’s able to win a lot of her 1v1s.

In order to counter the meta, you’ll need to have a couple of pocket picks ready. Ideally one of these is jax. Because he has favorable matchups into many of the most popular picks ,while also outscaling practically every other top laner in the game.

It’s not really possible to categorize them in a general sense. Some tanks are doing work, while others just aren’t making the cut. The strongest tanks right now in the top lane are: Malphite, Maokai, and Shen.  While pro players value ornn as well. He’s set to receive a nerf next patch anyway.

Also Shen is getting buffed, so if you’re a tank player i’d suggest sticking to one of the former three mentioned. Shen’s shield is receiving a nice buff and things are looking pretty good for him. Shield bash is pretty op on certain champions so give him a try next patch.