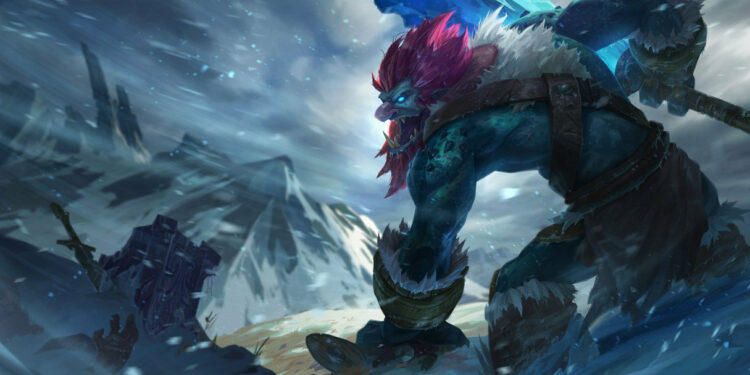 Support Trundle has proven to be quite strong in the right hand.

In some of the last patches of League of Legends Season 11, champions with the ability to quickly clear the jungle are dominating completely in the role of Jungle. Names like Udyr, Hecarim, Morgana, Rumble… are representative of this. That’s why champions that don’t have wide area damage skills and slow clearings like Trundle are becoming “out meta” very heavily in the Jungle position.

However, Trundle is trusted by a player from EU Nordic & East to climb the rank in a position that few people think about – Support. Specifically, the player named in-game Shetanin has continuously used him as a support to climb to Master with a win rate of up to 56%. So why is this strat so effective? Let’s find out together.

Basically, Trundle is a champion with powerful fighting ability in the early levels. With Q – Chomp at level 1, he will reduce your team’s ADC champion’s attack damage by 10 and make a huge difference in damage. So in bot lane exchanges, the side that owns him is usually the one with the advantage. Even when being poked, his passive also helps this champion heal very well for free.

To gain an advantage when laning with Trundle, Shetanin usually goes for E – Pillar of Ice at level 1. Although this ability deals no damage, it has a slight knock-on effect when cast and slows for a duration. This skill will help your ADC to reach and deal continuous damage to the target and create a great advantage even at level 1. When reaching level 2 and possessing Q – Chomp, you can even kill or force your opponent to use Flash.

What we should learn from the player Shetanin is that he always maxed out his E – Pillar of Ice in every match. With Trundle Support, you can’t deal too much damage from basic attacks because gamers only own a limited amount of items. Maximizing E – Pillar of Ice will increase his versatility in the mid-game.

As for building runes, you will choose the Guardian keystone in the Resolve branch to reduce the amount of damage that the ADC takes. You should then choose the Font of Life gem to increase your teammates’ healing when they attack an opponent slowed by E – Pillar of Ice.

As for Support Trundle’s build, Steel Shoulderguards is the perfect starter item. It would help if you then bought the Ionian Boots of Lucidity to increase the number of times you use E in combat. Next, the Mythical equipment that you should aim for is the Locket of the Iron Solari to protect allies better. After that, resistance items such as Thornmail, Dead Man’s Plate… are all good choices for Trundle.