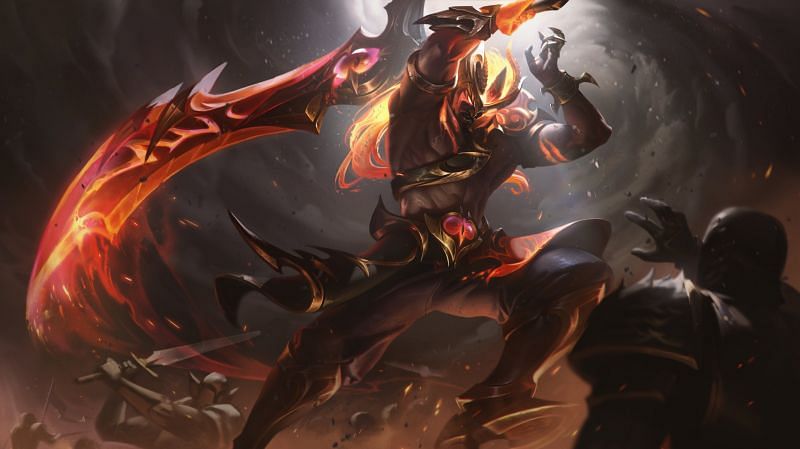 Ever since the beginning of League of Legends Worlds 2021 Play-in round, fans have spectated some impressive matches between some of the best teams in the world.

One of the things that make Worlds this year worth watching is the continuous meta surrounding it. The meta is one-of-a-kind and extremely wide. There have been several champions chosen from the beginning, as well as a few surprises. The emergence of Tryndamere in the midlane meta is one such surprise.

As regarded a “click to win” champion, the champion has never been seen as a high skillcap champion. He is someone with whom players must be familiar with the correct click. His laning phase consists primarily on right-clicking his way into things before turning into a killing machine of right-clicking down enemy champions in the late game.

As such, his playstyle is too simple and straight-forward for a crucial lane as Mid lane (Tryndamere used to be more familiar with Top and Jungle more). However, the reason he has grown so popular by the pick and bans is because bruiser items are just too powerful in the current game.

Goredrinker, Infinity Edge, Lord Domnik’s and Navori’s Quickblade are among Tryndamere’s core items. All of these things are far more powerful than mage items, and when combined with the lethal tempo keystone, Tryndamere become unstoppable.

His influence in the midlane is significant, as he can virtually carry the game on his own. That is why he has become such a midlane threat, with players such as Chovy and Perkz playing him in the League of Legends Worlds 2021.

However, with the recent Goredrinker massive nerf coming, we won’t sure if Tryndamere can still be noticed by pro players. Also, only a few days in the Play-in round, players have already started to find a strong counter to Tryndamere, which is Gragas.

Nonetheless, Tryndamere’s place at the top is far from over as his presence is still very decent and it’s high probability that this number will increase over time.