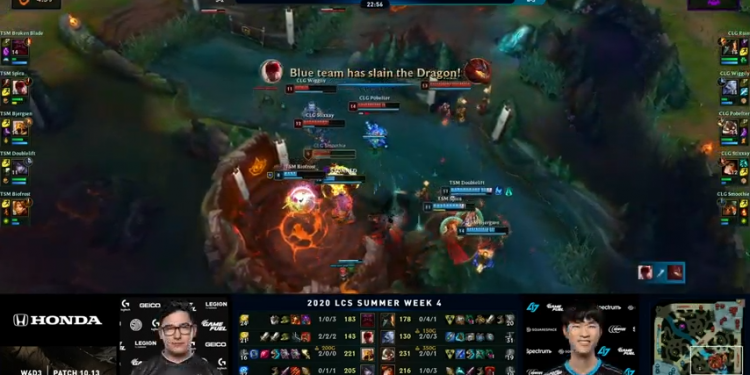 CLG opened the game with a First Blood scored on Biofrost’s Leona with a good Dredge Line and a well-timed Double Up from Smoothie and Stixxay, respectively. Volibear’s turret diving potential shone brightly as Doublelift and Stixxay are helpless against a giant bear with a built-in Ohmwrecker. Doublelift’s former team continued to rack up kills for both carries, Polbelter’s Corki and Stixxay’s Miss Fortune and score triple dragons consecutively, translating their early game advantages into a seemingly solid foundation for an easy victory against TSM.

All hope seemed lost until at 23 minutes mark where TSM denied the Infernal Soul when CLG only needed one more to complete their Exodia power card. This was also where the scaling power of Azir and Aphelios kicked in. Protected by two tough frontliners with plenty of crowd control tools at their disposal, Orrn and Leona, Bjergsen’s Azir and Doublelift’s Aphelios began wreaking havoc on CLG.

It was another coinflip when CLG supposedly attempt to trade the Infernal Dragon to TSM for the Baron Buff, but the sheer damage output from TSM’s carries made quick work on the drake. They proceeded to the Baron pit, wiping out those would-be-Baron-buff-recipent opponents with Bjergsen’s massive AOE damage, and secured both for themselves, closing the gap toward the Infernal Soul.

The third drake fell in seconds because of Azir and Aphelios’ tremendous late game scaling power while CLG hopelessly gave up the chance to claim the Infernal Soul. With triple Infernals in their hand and the lingering Baron buff, TSM effortlessly decimated CLG’s middle lane and its inhibitor, along with bot lane inhibitor turret before taking the Infernal Soul without breaking a sweat, practically sealing the fate of this game. Bot lane inhibitor exploded right afterwards, leaving the Nexus turrets and the Nexus itself exposed.

CLG made an amazing last stand on the top lane’s inhibitor turret, with Polbelter’s Corki mauling Spica’s Lee Sin. But CLG’s mid laner threw the opportunity to wrestle the game back to their hand by teleporting to the top lane brush, probably to defend the Baron Pit and had an unfortunate flash over the wall to escape the raging Ornn and Azir only to be hugged to death by Doublelift’s waiting arms. The absence of CLG’s mid lane carry paved the way for an easy third Baron Buff.

With the Infernal Soul, the Baron Buff, and later Elder Dragon being taken with ease thanks to the fact that CLG had to defend the base without sending Polbelter to stall the buff from being taken, TSM made a final siege against CLG’s Nexus, winning the game decisively, and moving up to the second place in LCS 2020 Summer Standings