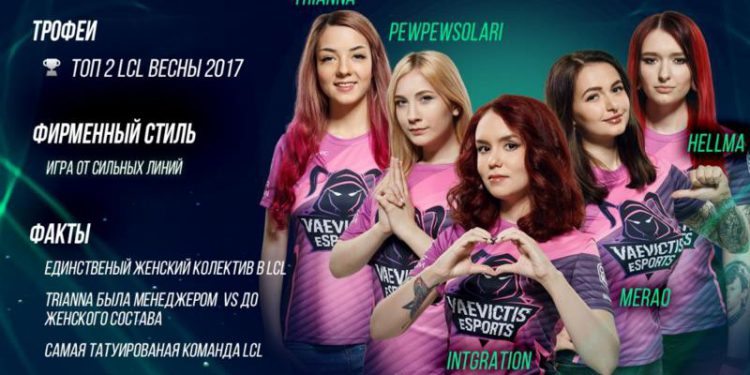 Recently, the LCL Organizing Committee of Russia made a decision when it officially announced the cancellation of eligibility for the LCL Spring 2020 tournament (about to start on February 22) of Vaevictis Esports – League of Legends team Professional all-female first.

The reason given is due to the team’s poor performance in the competitions attended. Vaevictis has played a total of 28 professional games, and has a 100% loss rate, on average they have to receive 26 kills per game, and there are often signs of troll games when using out-meta champions.

The LCL organizers consider that the existence and behavior of Vaevictis Epsorts has brought negative consequences for this tournament. Besides, Vaevictis’ level obviously did not meet the requirements of a professional team, and so, they were forced to leave the tournament.

On the team’s Twitter, Vaevictis Esports also thanked the tournament organizers and the fans:

“Thank you to organizers for the opportunity to play with other women ‘s teams! According to the girls, everything was organized at the highest level and perhaps we will take part in the following similar events. Now we have to wait for the beginning of the next split.”

Riot said that Vaevictis could consider attending the Open Cup – the pre-season tournament of the CIS region – to create momentum to return to the LCL next year.

As expected, CrowCrowd – esports organization owned by Kirill “Likkrit” Malofeev will be the replacement name for Vaevictis Esports to attend the LCL Spring 2020 tournament.

Kirill “Likkrit” Malofeev – the famous Russian supporter, the player who had play for Albus NoX Luna in the Worlds 2016 Quarterfinals – has established and become the Chief Strategy Officer of CrowCrowd from April 2019.

Vaevictis has not yet made any comments regarding the future of female League of Legends players.

On 10 February 2019, Vaevictis announced it was signing an all-female roster to compete in the LCL, the first organization to do so in a top level professional league. The announcement was immediately met with heavy criticism and accusations of it being a publicity stunt, as everyone on the roster mainly played in the support role and barely met the rank requirement to be on a professional team.

In an interview given on 7 March 2019, Ankote revealed the reason behind the roster changes; she alleged that a toxic team environment and verbal harassment by TR1GGERED led to arguments between her and her teammates, which prompted Vaevictis’ management to seek a replacement for either her or TR1GGERED. Ankote apologized to her teammates for her performance in the top lane after roleswapping with TR1GGERED before the roster changes, saying she was not used to the role. According to Ankote, her teammates ridiculed her apology and dismissed it as an excuse. After an investigation, Riot Games Russia issued TR1GGERED a two-game ban on 15 March 2019 for verbal harassment and threatening Ankote on stream.

Edit: Not A Gamer