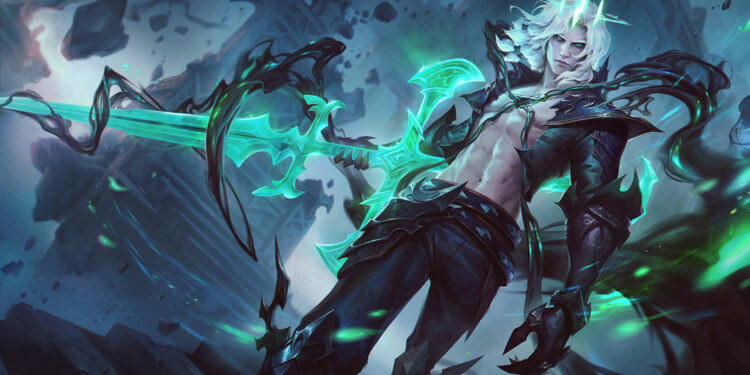 Bring Ruination to the world with Viego, the Ruined King.

“NO PRICE IS TOO GREAT. NO ATROCITY BEYOND MY REACH. FOR HER… I WILL DO ANYTHING.” – Viego

Once ruler of a long-lost kingdom, Viego perished over a thousand years ago when his attempt to bring his wife back from the dead triggered the magical catastrophe known as the Ruination. Transformed into a powerful, unliving wraith tortured by an obsessive longing for his centuries-dead queen, Viego now stands as the Ruined King, controlling the deadly Harrowings as he scours Runeterra for anything that might one day restore her, and destroying all in his path as the Black Mist pours endlessly from his cruel, broken heart.

Viego can temporarily possess enemy champions he helps kill, healing for a portion of their max health. During possession, Viego’s items, attacks, and non-ultimate abilities become those of his slain enemy’s, and he gains a free cast of his own ultimate, Heartbreaker. While possessing an enemy, Viego also gets bonus movement speed when moving toward enemy champions.

This is a brand new mechanic coming to League of Legends! We are not sure whether this ability will be great or not. In casual matches especially in lower-ELO, the tide of the games tend to completely shift on one side. If he is on the weaker side then that’s great but what if he is on the stronger side? Due to the interaction of this Passive with his R – Heartbreaker, this skill might provide some decent gap-close, but not so much in terms of damage.

Passive: Viego’s attacks deal a percent of the target’s current health as bonus damage on-hit. When Viego attacks an enemy he recently hit with an ability, the attack strikes twice. The second strike siphons health from the target instead of dealing regular damage, but still applies on-hit effects and can critically strike. This passive is maintained during possession.
Active: Viego stabs forward with his blade, damaging all enemies hit.

The meme is real. Viego actually has a mini “Blade of Ruined King” at the start of the game.

Viego charges up and then dashes forward, hurling a blast of mist that stuns and damages the first enemy hit. Stun duration and mist range increase with charge time, damage, and dash range don’t.

As a jungle champion, this will provide him decent gap-close when he looks for ganks in early stage.

Viego spreads a wave of Black Mist around a nearby wall. While in the mist, Viego becomes Camouflaged and gains Attack Speed and Movement Speed.

Viego discards any bodies he is currently possessing and teleports forward, attacking the enemy champion in range with the lowest percent health and dealing bonus damage based on their missing health. Other enemies in range are knocked away.