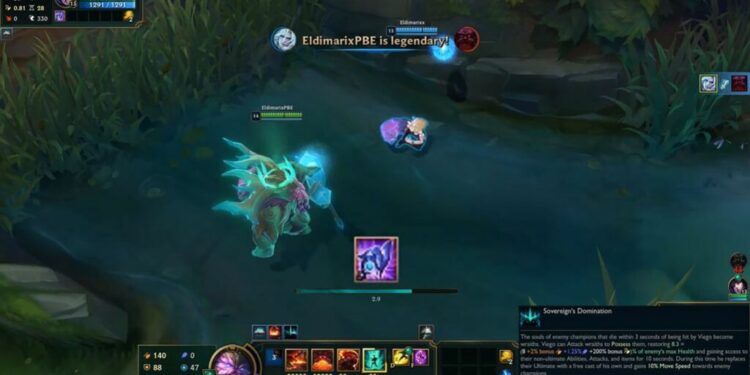 Viego can use all abilities of the champion he use his Passive on.

As Viego is currently available on the PBE server, many gamers are trying interesting experiments on him.

Based on his descriptions, when casting his Passive – Sovereign’s Domination, he can possess full control on his opponent items, abilities (except the Ultimate) and look, even skin. Youtuber Eldimarix has recently posted a video in which he tested his passive in many ways.

The Ruined King can Forge Items after transformed into Ornn, however, he can not buy item using Ornn’s passive due to lack of transforming duration. He can also take advantage of Zac resurrection Passive or cast Azir’s Passive on fallen turrets.

If the enemy champion has a Guardian Angel that has just finnished its cooldown, Viego can have the passive from this item as well.

In short, if he casts his Passive on a champion, he will gain full control of their items, skills, and passive – this will thus help him remain balanced – instead of being the second version of Sylas.

Players are looking forward to his official release on the main servers. After his official announcements, many discussions have been made on all League’s communities. What are your thoughts on Viego, leave a comment, and let us know!