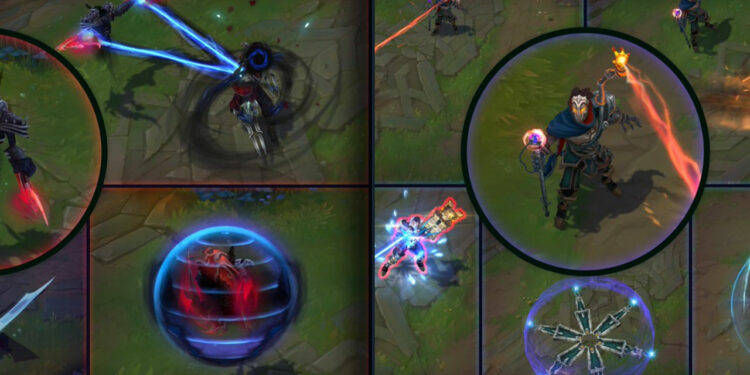 Nocturne, Viktor, Malzahar and Ignite are all getting visual effects updates, here are what they look like inside League of Legends.

Today, 21th August 2020, Riot Beardilocks has posted on both Twitter and Reddit bringing you new information about the upcoming visual effects updates. These changes include Nocturne, Viktor, Malzahar, and Ignite. They will be available on the League of Legends live server in patch 10.18.

What is “Visual Effects Updates”?

To make it short, Visual Effects Updates are changed that applies to champions and gameplay elements’ visual effects, which makes it much easier to see and differentiate it from others. Riot’s goals are to improve and clarify older champions who have been outdated for quite a long time, making them become more modern to keep up with today League of Legends standard.

Besides giving players more feeling and allow them to create a deeper connection with a specific champion, VFX updates also add a better idea of how hitbox in League of Legends works, there are plenty of spells in the game that even though they look so thin, the hitbox is actually quite big and can create confusion throughout playing. In the past, they have made lots of quality of life updates for old champions and there will be more and more champions to be improved in the future.

They reduced the noise, but make it feels like you are going to die if you get ignted…

“VFX Update aimed at modernizing this old champion’s feel while improving his gameplay readability. We also took this opportunity to get a better look at the Void thematic’s VFXs to better illustrate its modern representation in the Lore.“

The changes make Malzahar Passive, Q, and E much clearer compare to the current one. For lower ELO League of Legends players, Malzahar has always been an annoying champion, from the fact that his playstyle is too safe and they can’t really know when to burst him down especially he is too vague in a large team fight, Malzahar desperately needs a visual effects updates:

“VFX Update aimed at modernizing this old champion’s feel while improving his gameplay readability. The primary improvements were around making sure his Q is visible and that the passive clearly communicates the area of effect. Nocturne had too many colors on his kit previously, so we made the decision to unify to just two colors – red and blue.“

Again, these changes will help players easily notice him in big team fight. His color scheme is also redefined:

“VFX Update aimed at clarifying this champion’s gameplay, whilst also updating visual fidelity. The primary improvements were around making sure his E clearly communicated the width of the affected area. The other changes on Viktor were kept very small scope in order to deliver this in time for Worlds.”

Aside from Viktor’s E, nothing in particular is changed that much, they just make it clearer and feel smoother:

These Visual Effects Updates are also added to all available skins that those champions have if you want to see more details, check out all the videos we listed above or their reddit post. That all we have, for now, have fun in League of Legends.