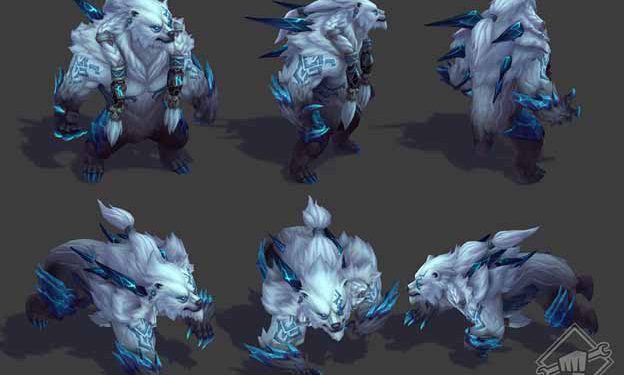 The rework Volibear will have a more frightening, wilder look and of course matches the biography of a demigod – Volibear rework

Riot Games has just revealed some new information about the Volibear rework. The God of Frejlord Bear will have a huge modification in both gameplay and appearance like what has been done with Fiddlesticks

Volibear will have a more frightening, wilder look and of course fits the profile of a demigod. He will have electrical currents running around him, huge claws and fangs, as well as thorns that grow behind him.

As for skills, Riot Games wants Volibear to always fight non-stop. No matter how fast you run, Volibear will always catch you. Nathan Lutz – Riot’s design explains that this is reflected in the ability to keep Q and W, and he can use them more in combat.

Completely new skills will include Ulti and E. While Volibear’s skill effects designer Neal Wojahn says that these skills will have a range of intricate effects, including storms, and thunder, but he declined to give further details.

Besides, here are some photos of how they are thinking of ways to rework skins for Volibear:

With champion updates, we’re always looking for ways to take older skins and make them something really special now that we have a better understanding of our style, IP, and skin worlds. With the addition of Northern Front Swain, we felt like creating a really cool Arctic Ops version of Northern Storm Volibear would be exciting and match the feeling the skin was originally going for.

Using the Arctic Ops skin line for inspiration, + BEAR, + ELECTRICITY, we went for a first round of ideas.

Option “C” immediately grabbed everyone’s attention. For a while, we considered keeping some form of the hat since it was a big part of the classic skin, but we felt like the tactical mask, gear, and tesla tech freshened up the existing motif of “cool winter tech.” Now to give him pants…

We experimented with a few different color options to be sure the camo worked on him and didn’t look too busy or out of character. We opted for the more white/monochromatic version, as the others started to feel like they could be trendy ski jackets.

We also had to figure out what the Northern Storm version of the frozen lightning spikes on Volibear’s back could be. Our idea was to turn them into antennas that would charge up his electricity. We didn’t want the pack on his back to be mistaken for an internet router, so we added charges and a “power” lightning symbol to it. Throughout concepting, we had to make sure the patterns and tech gear still looked good when Voli ran on all fours—a challenge throughout all of development.

Next we made a quick 3D proxy model to be sure this skin design would work on his base rig and that the breather mask could open with his jaw, because our bear is a biter.

Our team was stoked to work on Northern Storm Volibear, as it’s a vastly different fantasy from base Volibear and felt unique in his skin lineup. We hope you like the final concept! And with that, we’re off to continue updating the rest of Voli’s skins.

Riot also tells us more about a completely new skin inspired by the fear of ancient Evil Gods called Thousand Pierced. However, all we know now is just wallpaper, but it’s quite mysterious and scary. This skin will be distributed completely free to players who already have Volibear or anyone who buys champions in the update when he reworks.