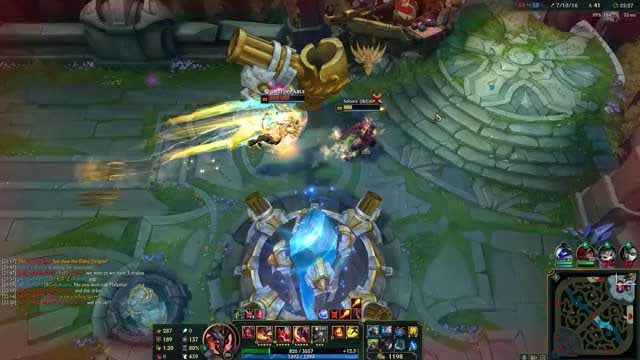 For League of Legends gamers, Fountain Laser is a familiar place on Summoner’s Rift, a tool to bring the safest place to play the game against the oppression and oppression of the opponent. So what if the Fountain Laser also abandoned you?

A question about a seemingly never-ending phenomenon in the game of League of Legends, recently, the answer was recorded by Vandiril in a short video and posted on his personal YouTube page. Everything seems to be no more rulesless when you lose to the opponent.

Theoretically, when an enemy invades, the Fountain Laser will attack them with a laser that deals 1000 standard damage every 0.5 seconds (2000 damage per 1 second) and ignores all beneficial effects on. The enemy like:

However, there were some exceptions that caused the Fountain Laser to stop attacking itself and divert to another enemy, namely skills such as:

However, recently on the PBE test server, Fountain Laser seems to have encountered a serious error that makes them inactive, despite the teammates in its arms being killed and humiliated by enemies form.

This bug can completely cause the enemy has won the road to take advantage, causing the enemy not to play the game literally. What can you do when being led by the enemy, even they even step straight into your house?

Will it be even more miserable if your enemy or a fellow teammate presses the report button on you as intentionally dead at the end of the game?

What happens if you see a penalty notice sent to you for too much death / willful death during the game? Regretful, injustice, because of game errors, but I received the consequences.

Already 1000 days, Zac still has not received a new skin to change his skin

Fortunately, these game bugs have just appeared on the PBE test server and have been discovered. Riot Games will quickly offer a way to fix this game error as soon as possible to avoid affecting players.