Why Cassiopeia is becoming such a strong pick in the Top lane? 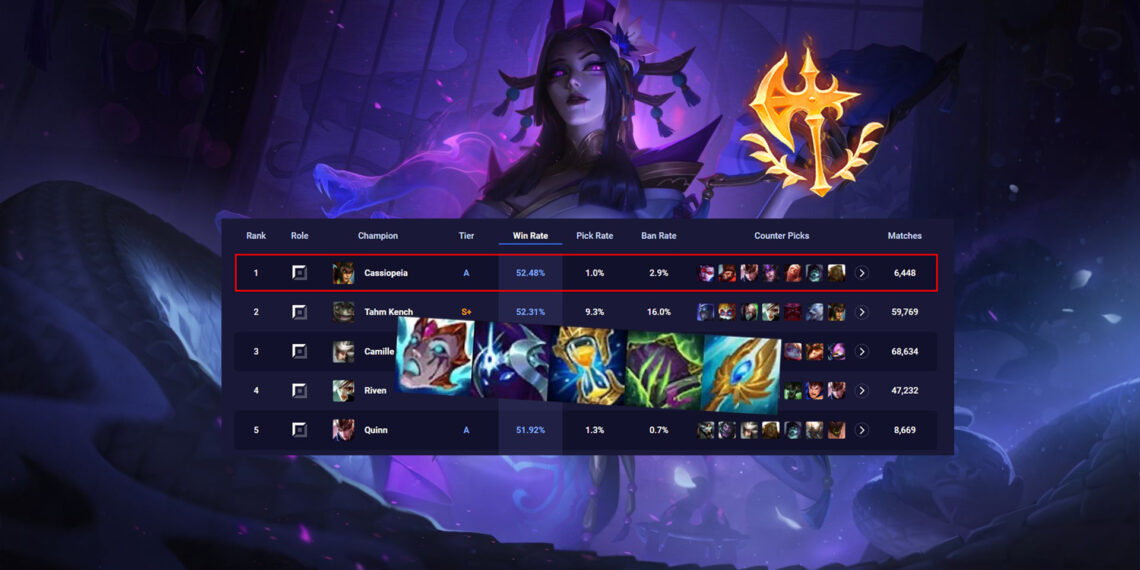 Patch 11.15 has arrived at the live servers, and so far, some surprising niche selections, like Cassiopeia, have topped the win-rate table of any top lane champions.

Cassiopeia in the top lane has been one of the most surprising champions to perform. The Serpent’s Embrace received a significant damage buff in patch 11.15 and can now be used in three distinct roles. This champion was exclusively seen in the mid lane in Platinum levels and higher prior to patch 11.14, but this is obviously no longer the case as she is performing very well in the top lane and bot lane.

According to u.gg, Cassiopeia win rate in the top lane is now considered the highest at 52.48%, the number is respectively high among other famous top laners like Tahm Kench, Camille, Riven, and Quinn.

The unexpected increase in her win rate is perhaps due to a recent buff to Cassiopeia’s Twin Fang (E), which received a bump to its empowered basic damage across all levels. It’s no surprise that she is doing better in solo queue now that she has the primary damage ability. However, the present win rates maybe a little too high.

Because Cassiopeia has such a great win rate thus far, it appears that players are aware of it. For the time being, her win rates in all three positions appear to be above 50%, which might indicate additional changes in the near future.

Cassiopeia appears to be doing well in the top lane versus any bulky bruiser champions since she can kite them while doing a lot of damage. But her biggest weakness is her mobility with absolutely no dashing skill, and she doesn’t have access to boots so champions like Riven or Camille that can get close to her very easily can still outlane her.

It will also be fascinating to watch if Cassiopeia returns to any big tournaments as a top laner.