Wild Rift has a new rank, which scares other MOBA game players 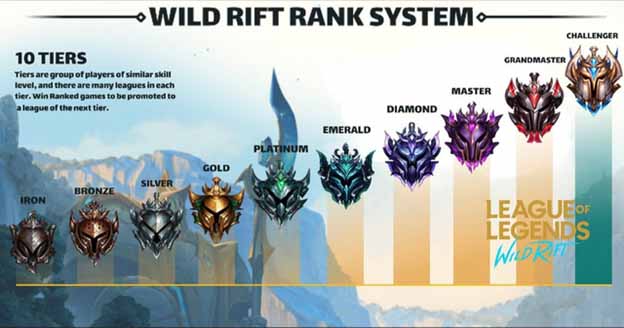 Most likely, the rank system in League of Legends: Wild Rift will be a little different from the PC version and be able to challenge the MOBA Mobile players.

Wild Rift has a new rank, which scares other MOBA game players

At 6 pm tomorrow (Filipino time), some gamers in Brazil and the Philippines will have the opportunity to experience the Alpha Test version of League of Legends: Wild Rift soon.

This is a limited player test so only a few players randomly selected from Riot or received an invitation code from Riot Games can participate in the experience. Most likely, many other players around the world, will not be able to join into this version.

In addition to introducing the features of the map, gameplay, list of champions … Riot is likely to also launch a new ranking system, a little different from the League of Legends PC version.

Thus, the rank in League of Legends: Wild Rift inherited the fierce fierce PC version will be more and more competitive, enough to make many players feel “sweating” and certainly will not be as easy as the rank of other Moba Mobile.

Before that, there were many high-level players in the other Moba Mobile who exhorted new teams to compete when League of Legends: Wild Rift officially opened.

This article immediately attracted the attention of both the other Moba Mobile players and players who were expecting League of Legends: Wild Rift.

There are gamers who are of the opinion that other Moba Mobile players who come to play in League of Legends Wild Rift will only trash player. After that, a series of comments on gamers of these two games.

League of Legends: Wild Rift, despite ignoring the hardcore feature of being the last hit like the PC version, still retains mechanisms such as plugging wards or recall to buy items, combined with different elements of Gameplay, will also be a challenge for players who have never experienced the PC version.

Especially for gamers of other MOBA Mobile, which is familiar with the somewhat simplified gameplay, it will take some time to integrate with League of Legends: Wild Rift when this game officially launches.

Therefore, even the masters of other MOBA games are not necessarily able to outperform other players in League of Legends: Wild Rift.

With features that are somewhat strange like plugging wards, which is not something that many other MOBA Mobile players know, it will definitely create strange things.

Therefore, even the players from other games come to LoL: Wild Rift can still eat as usual because of differences in gameplay, features, and champions if that player has never experienced League of Legends PC before.