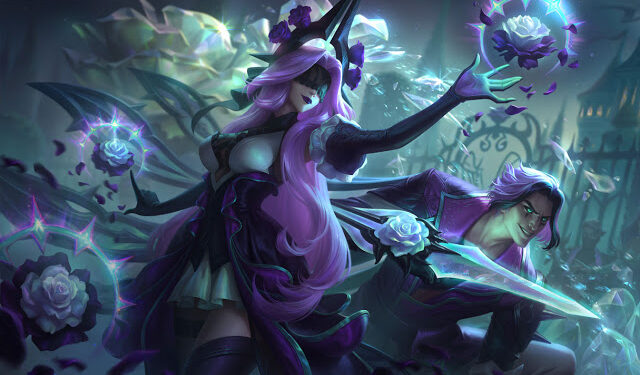 Riot is keeping up with their promises of releasing more skins for less popular champions, ever since the beginning of 2020

This is a new approach in making cosmetics for Valentine event.

Swain and Zyra used to be known as two champions with some of the longest delay between skin releases, with Swain having 7 years a gap between his Tyrant Swain and Dragon Master Swain (2011 – 2018), and Zyra also had a time when she belonged to the infamous 1000 days club.

Both now received new skins that come with flashy crystalized effect, with Swain retaining his trademark coat and long hair. Zyra’s plants are now bright white roses that boast rather freezing and piercing sensations for her laning opponents – if laning against her alone was not excruciating enough.

Swain and Zyra are stated to be too allies who formed their alliance to host and protect this year’s Crystal Rose festival.

Syndra used to be one of the champions staying in the 1000 days group. As Riot promised that her mains could expect new skins within months, half a year later a new skin for her is teased toward the audience, along with one for Talon as well.

These two skins take a darker tone compared to Crystal Rose and are described as the “antagonists” of this new universe, as they are scornful toward the celebration. Syndra seeks to poison the Crystal Rose to avenge hers having been shunned for years, and Talon hellbent on exposing the hypocrisy behind all glittering finery and sacred vows behind it.

While we currently have no concrete information on when these skins will be released, as a part of the annual Valentine event, expect an official release date around February 14th, 2021.