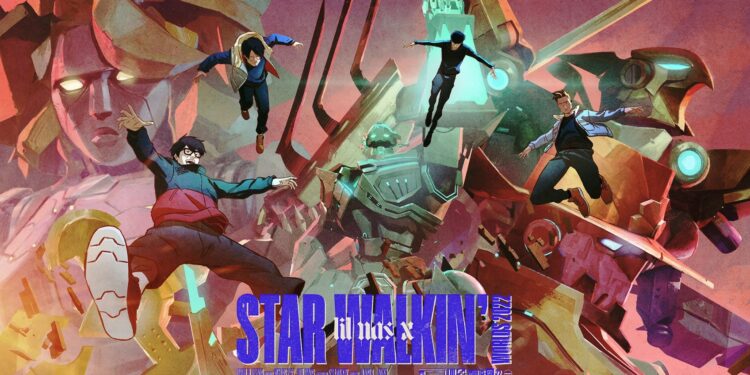 The two collaborated on an energetic and original tune that will follow players and spectators at the grand final in San Francisco, which also served as the setting for the music video.

In some senses, the publication of the Worlds 2022 song signals the tournament’s official start. The games begin on September 29, but owing to the song, excitement for the event has reached to the next level.

The anthem was accompanied by an animated video showcasing four distinct players from 4 major regions, including EDG’s Meiko from LPL, Fnatic’s Humanoid from LEC, Gen.G’s Chovy from LCK, and Team Liquid’s CoreJJ from LCS. Lil Nas X also appeared in the video, carrying the World Championships banner on his back.

Humanoid, Meiko, and Chovy will attend the competition, however, CoreJJ will not because his team did not qualify. However, given that the video was made well before the qualification period began, Riot Games’ decision to include him seems acceptable.

The major premise of the video, in any event, was these players competing for the Worlds 2022 cup. In addition to the players, the video included four champions: Azir, Thresh, Rell, and Twisted Fate.

These champions, on the other hand, possessed robotic traits that referred to the impending Mecha skins, which will be introduced alongside patch 12.20. The featured League of Legends Worlds 2022 skin, Azir, is currently available, but the other three will be released on October 17.

Before the battle, the players were seen standing above the Golden Gate Bridge in San Francisco, a prominent place in the United States of America, but they rapidly began accumulating strength and calling their champions.

According to Riot, fans may find several Easter eggs in the music video, aside from the players and apparent champions. They can be found in “almost every shot,” to be more specific.

Overall, it was a fantastic MV honoring Worlds 2022, which will begin on September 29.