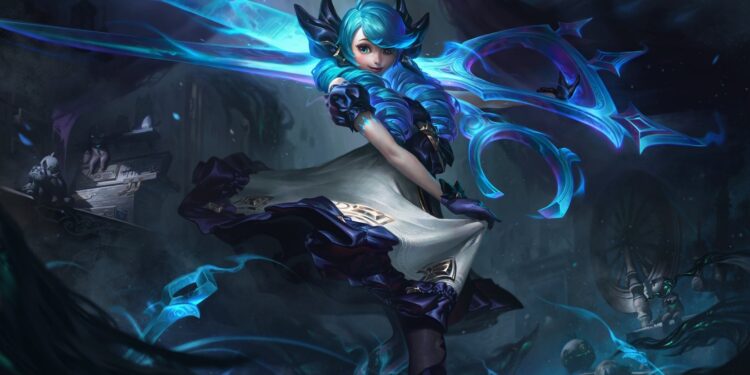 Gwen is currently standing in a strong position at the moment. With her kit being able to kite so well and catch up easily when she’s left behind, knowing how to counter her on the top lane will be crucial.

Ranged champions do really into Gwen as she is a melee champion. Ranged champions can bully her down frequently whenever she walks up to farm CS, and if you’re able to keep her low, it will be impossible for her to engage. When playing against a melee champion, Gwen has more opportunities to trade with you, so it can often be better to pick someone who has the range advantage. However, depending on which melee champion you’re playing, you can do well into her too.

Gwen isn’t powerful at below lvl 4. Get the level up before her, which is the first minion wave, followed by one melee champion on the second wave, and then look to play aggressive. Early game dominant champions such as Renekton or Talon will want to use this level spike to play aggressively and get her low.

At level 3, Gwen will gain access to her W. This ability offers her extra protection but doesn’t exactly enhance her trades. If you’re strong at level 3, you should look for an extended trade with her. It wouldn’t be a bad idea. Knowing when you’re strong is very important in League of Legends. Understanding your champion’s power spikes offers you a ton of leverage in the lane. For instance, if you know that the enemy is weak in the early game and you’re strong- you can abuse your strengths to set them behind.

We touched on it briefly in our previous tip, but if you’re able to bait out her W before committing to trade, you will increase your chances of killing her as her W can block outside damage from hurting her. This includes long-ranged skill shots from your allies too, but it doesn’t include tower shots. If you’re playing a melee champion, playing around her W isn’t much of a problem, but if you’re a ranged champion who wants to land long-ranged CC like Syndra, you must bait this ability out or get inside it so she cannot block some potential damage.

Nevertheless, if you’re able to bait out her W, you have a rather large period of time you can look to play aggressively. Her W gives additional defensive stats, so she cannot activate it to buffer her defenses when this ability is on cooldown. If you’re a melee champion, she will be easier to kill as she will not have additional armor to protect herself with. Her W has a 22-second cooldown at level 1, which gives you plenty of time to play aggressive and try to kill her.

In team fights, try to poke her down before initiating a fight. If she pops her W to protect herself, she looks to fight soon afterward, so she cannot use it to protect her in the fight. Do not commit to long-ranged or global abilities like Ashe R, Jinx R, or Urgot R when her W is up in late-game fights.

Gwen’s all-in potential is extreme. This is because of her E and her Passive, which allow her to close the gap between her and her enemies. To make laning against her easier and to reduce her kill pressure on you, it’s wise to manage your minion waves and avoid constantly pushing her into her tower.

If you can keep the minion wave closer to your side of the map, she will have less room to maneuver and find it difficult to kill you. we would suggest for melee champions to keep the wave close to your tower but outside the towers range. You’ll still be able to chase her down and kill her if the minion wave is here. Your Jungler will also find it easier to gank you.

Avoid looking to fight with Gwen when she has lots of stacks on her Passive. Preferably, look to trade when she has little to no stacks or trade when her Q is down. This will reduce her ability to trade back with you. If you fight her while her Q is up and she has 4 stacks, she can deal a lot of damage to you and win practically any skirmish- especially if she is ahead. Ideally, try to fight her as soon as her Q has been used and when she has few stacks. This way, she will not deal additional damage to you in the trade.

Know When To Retreat

Gwen can deal a surprising amount of burst damage, and she can even tower dive you if you try to stay in the lane when you’re low. While her W will not protect her directly against the tower, the additional armor and magic resistance will make it easier for her to dive into you. The tower will deal slightly less damage to her either.

Furthermore, she can gain stacks on the tower by auto-attacking it and then using her Q aggressively to take you down. All in all, she is deadly at all parts of the game, and even though her W doesn’t seem effective against towers- it is.

Back when you’re low, so she doesn’t kill you. If she gets an early lead over you, it might be the start she needs to snowball a lead and run you down over and over again.