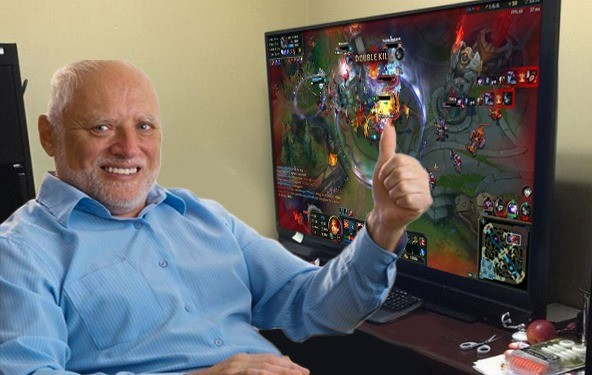 Hobbies and enthusiasm that to pursue the passions of the parents to League of Legends seem to be the same as us.

For the casual gamers like us, the Gold rank is just one of the very normal milestones of the ranking in the League of Legends. Even those who play Iron, Bronze, Silver cannot touch the Gold rank, will be considered noob players.

We usually say that to prove the truth that Gold rank is nothing too big and to be proud of.

But it’s for a casual LoL player LoL. For the player who is 43 years old, he has both a family to worry about the burden, that he climb to gold rank is really a worthy reward of that gamer.

This is also the story that is being widely shared on Reddit when it is told by OP with a very excited and proud:

I’ve been playing League for over nine years now, and the dream always was to be above average. It’s not a big dream, but there you go.

The problem always was that I suck. My already non-existent mechanical skills managed to deteriorate even further after I hit 40. I also can’t play every day, since my family and my job come first. And there’s always too much happening on the screen for me to follow. I regularly confuse my own character with one of my teammates. I’m incapable of outplaying anyone.

So what I do is play braindead champions in the toplane, disable chat, ward as much as possible, bash towers whenever I can, and let the young folk carry me.

This afternoon it finally happened. I goofed around on Garen a bit while my Draven killed everyone and everything, and at the end of that game I was Gold. I’m absolutely ecstatic, but no one I know plays League. In fact, everyone I know thinks I’m a bit of a twat to still play videogames at my age. But to me this is a big thing.

So there you go. And I’m pretty sure if I can do this, any one of you can too!

The post has received more than 1500 comments on Reddit, and a more interesting thing is that there are many other gamers who also revealed their “age”, and then we know that in this topic, they’re all elder, other players are only able to show their admiration of their hobbies and passions:

42 here. League is an awesome game. Problem is, it’s too tilting sometimes, and most days lately I’ve been too tired to face ranked toxicity and I only enjoy playing ranked. I’m not saying it’s only tilting because of my teammates, I tilt myself too even when I disable chat.

But it’s a fantastic, fun game, and you’re always learning.

It is not sure if the above-mentioned Reddit accounts are true or it’s just a way for the community to send out the words and congratulations to the endearing uncle, but one thing for sure is that our 43-year-old gamer must be very excited when his post received so much attention and reward appreciative.

It is possible to see that not only LoL but there are any game at the present has also received the attention of gaming community of all ages.