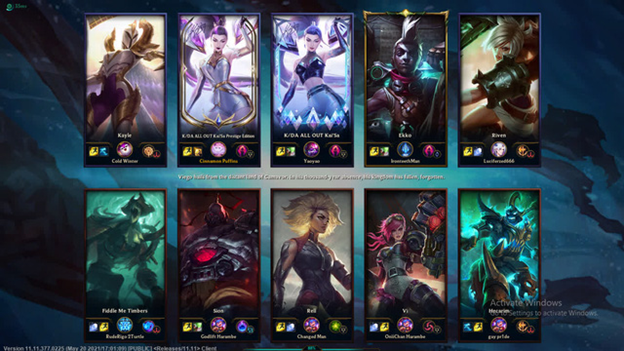 Riot Games is getting worse in fixing bugs.

Usually, it is only in the One For All game mode that players can select and use the same champion in the same team. However, the League of Legends community was recently surprised by two identical champions who appeared on the same team in the Howling Abyss.

According to the community’s analysis, the power of the Kai’Sa duo is much stronger than other champions because they can proc each other’s passive. Moreover, many other interactions with the ultimate also help this duo increase their survivability in combat. So this Kai’Sa duo won is not too surprising.

In fact, this has happened before on several other servers. But after 2 months, this bug still occurs in Howling Abyss. Despite being the winner, gamers who suffered the above bug were not happy when they could say they had experienced an “incomplete” match. Besides, having a buggy client also makes many gamers frustrated.

As mentioned, this is not the first time that the champion duplicate bug has occurred in League of Legends. The increasing popularity of the game content also leads to more problems. Who should fix these problems immediately instead of only when gamers voice their complaints repeatedly, yet Riot still doesn’t respond or even make promises to fix them.

Many comments from the community said that these problems continued to happen after many updates, proving that Riot Games was so negligent that they did not know their client had this bug or know this bug, but they also do not know how to fix it. Thus, allowing the League of Legends community to criticize and laugh at Riot Games’ “200+ collective years of professional game design experience”.