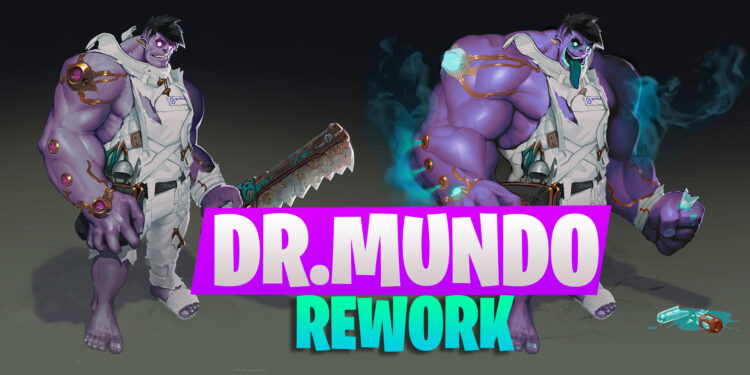 Breaking News in Champion Roadmap: Dr. Mundo, A Rising Star, An Iron-Willed Criminal, and a Possesive Jungler – all the new faces that are coming to League of Legends

As Worlds 2020 is getting closer and closer, Riot decides to share an extremely hot topic right before all players around the world start to clash. Riot NA has just updated their Champion Roadmap, marking 3 new champions and their final VGU Update this year, Dr. Mundo. Just a quick recap, in 2020, Riot had released 4 new champions for each distinctive lane: Sett (Top), Lillia (Jungle), Melee Assasin (Yone), and Marksman (Samira). There are only 2 slots left, 1 for a Mage which is Seraphine and the other one is for Support which is coming in the near future. Let’s us begin this Champion Roadmap.

Since the last confirmation about Dr. Mundo VGU Rework, we have finally received some new information about this Mad Man. Basically Dr. Mundo will be changed rely on these concepts:

This time, Dr. Mundo will debut with a new visual image, an extremely hard-to-lock-down playstyle but comes without any Crowd-Control ability.

“I don’t know about all of you, but I have become a fan of so many champions over the years. Have any of you become so charmed by a champion, that you hang posters on your walls, play their theme on repeat, and lock them in every game you possibly can? Regardless of your current level of fandom, when Piltover and Zaun’s new rising star finally hits the promenade, she might convert you into an instant mega-fan. I hope you’re all ready to crowd around her and cheer along!”

Via downloading this picture on LoL NA, this picture was named 04_Mage_Teaser, but this Mage might come with a brand new mechanic similar to Zoe’s Sleep. Maybe she has the ability to hypnotize other champions, making them being disabled or unable to target her in a short period amount of time. Again, will this champion somehow be related to music like Seraphine?

Wanted! Must be alive for reward!

“Attention! The empire will pay greatly for the capture and detainment of this runaway criminal. The fugitive is EXTREMELY dangerous, so approach with caution. They are heavily armored and will attack if even slightly provoked. Wear light armor, as reports show warbands have been killed with their heavy gear twisted and shattered, littering the ground around them. The criminal’s been known to mount a quick retreat when cornered, so bringing a highly-trained team is recommended. If you somehow manage to detain this criminal, please bring them directly to the closest empire-building marked with a black rose.”

Despite all the description given out by Riot, this will be a Support Champion. Maybe with the success of Senna and Pyke’s debut, this support will bring fresh air to the Support role which doesn’t receive many changes throughout Seasons. A criminal with heavy gear but extremely nimble – we are super excited to see what Riot will bring.

This will be a Jungle champion, but a romantic one. Maybe he/she will also have the brand new hypnotize mechanic similar to the new Mage we posted above. Or maybe this will be another love story like Xayah and Rakan, we will have to wait as this Champion Roadmap’s description is still pretty vague.

This is one of the most exciting Champion Roadmaps we have ever seen! We can’t wait to see how these champions will function in Summoner’s Rift. Also, Dr. Mundo will be our next favorite champion to get a rework, he is way too old and clunky now that he really needs some extra love. With his mechanic remains fairly easy, we hope they won’t break the game and make the same mistakes like Sylas and Akali. That’s all we have for now, see you in Summoner’s Rift.